The Tepee House – Eccentric Design In The Midst Of The Woods 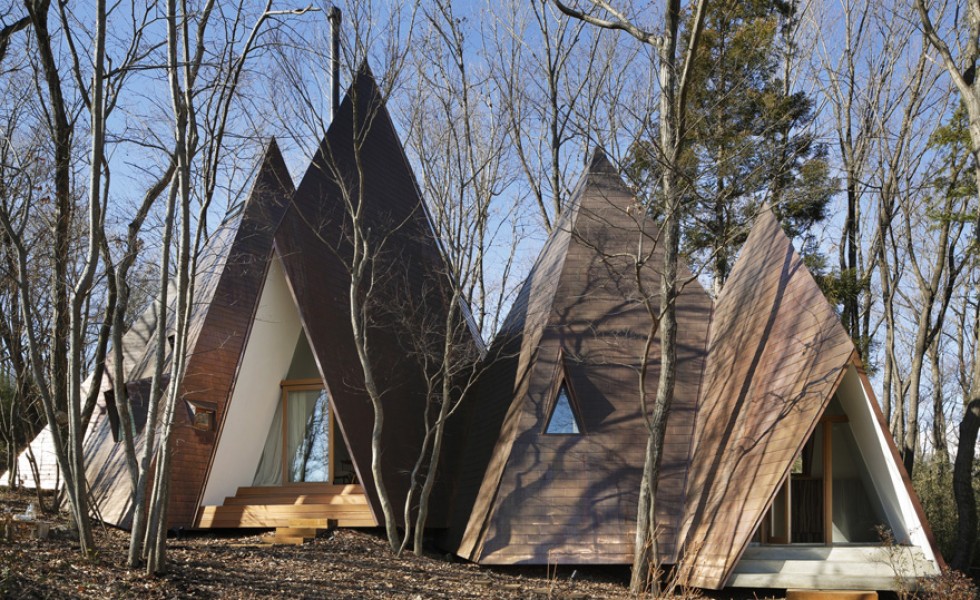 At a stone’s throw from Tokyo, in a forest near the town of Nasu, north of the Japanese capital, an eccentric presence makes occasional trekkers to stop and cast curios glances. Among the diffuse trees, a house featuring a strange design appears to have sneaked into the landscape, looking as if an integral part of the natural landscape. Seen from the distance, the house seems a batch of tents, like those tepees built by the Jomon people, an ancient Japanese population. In reality, this is a living house in all its splendor and functionality.

The creations belongs to the architecture firm Hiroshi Nakamara&Nap and is the answer given to a client’s request, a married couple who enjoys organic farming with local primeval vegetables on weekend. They desired not to cut woods in the site as much as possible and to live in the surrounding woods. As a matter of fact, the ingenious design of the place is the practical answer the architects came up with to meet this specific desire. The tepee house – every corner was thoughtfully designed Here is what they say: “Since the site is located in the midst of dense woods, we came up with the idea of having a high ceiling to let the direct sunlight in the house. However, this would result in the space becoming too large and cost a lot to run the air conditioning. Therefore, we eliminated unnecessary space. First, we made sitting and lying spaces along the walls, and cut down the upper space diagonally to make the ceiling lower based on the way people move. This resulted in a tent shaped-house with only one third the volumes”.

The house is similar to primitive spaces seen in the houses of the Jomon People (Ancient Japanese), native Africans and Mongolians. Because the family sits along the low wall facing each other, the structure of the house initiates a lifestyle where there is close interaction.

In addition, this form matches the tree branches that spread out radially, allowing the house to be built without cutting most of the trees. This enables a warm space to be created that mingles with the trees, the architects further say on their website.