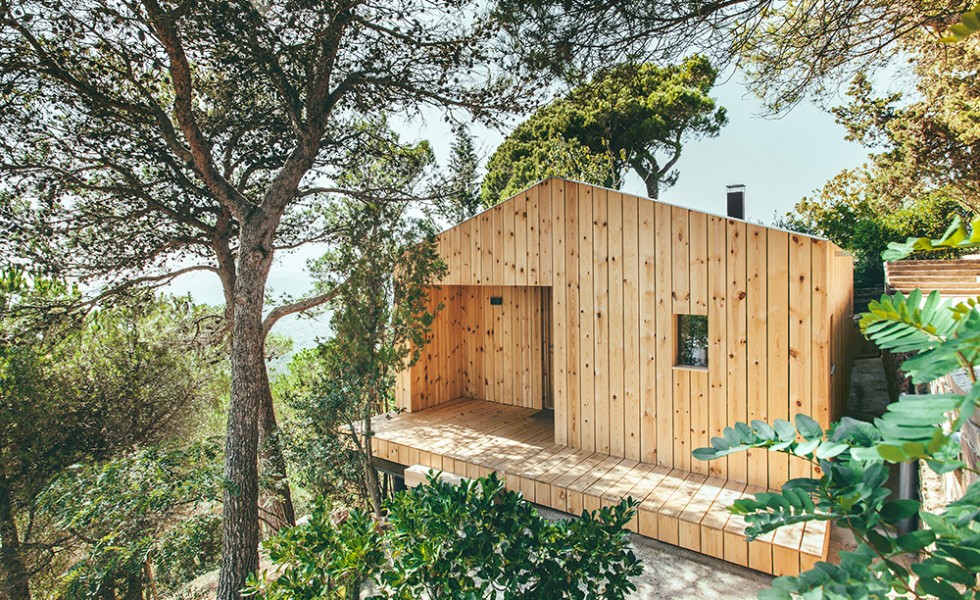 A simple cabin can be more than meets the eye. At Sant Cugat, a small town in Spain, an architecture firm – Dom Arquitectura – rose a small chalet which incorporates the most modern building techniques so that the tiny place has a minimal environmental footprint. The cabin, built of prefabricated parts of locally sourced, red pine wood that have been cut-to-measure offsite and were then assembled on-site, is a perfect example of a passive home in which Mother Nature plays the central role in heating or cooling.

The orientation and position of the 76 square meter house have been studied in order to take the greatest advantage of the site’s available resources and climatic conditions, reducing its environmental impact, energetic consumption and improving its interior comfort, the architects say in their presentation. The house has a rectangular plan. Its longer side is oriented south, and has the biggest openings to capture radiation during winter months while protected from the sun during summer. The other 3 elevations are rather opaque, with few openings on the northern façade, which will create natural cross ventilation during summer. The compact rectangular volume is only perforated at the terrace and porch, which allow for those two spaces to be covered and protected by the roof overhang. The compactness contributes to the energy reduction demands.

The interiors are done with three layers of pine plywood, and the exterior is clad with fir wood for a warmer appearance. The choice of timber as a main material plays a role in the general insulation of the construction since timber has very low thermal conductivity. In addition, the architects have placed 16cm thick insulation in a natural and biodegradable material. The material chosen is wood fibre and the insulation wraps around the whole construction with 12cm in elevations and 12 in floors and ceilings.

Seven water tanks have been placed underneath the house. These can hold up to 10 cubic meters of water collected from roofs and exterior pavements. The water will later be used for irrigation of the lawns and the garden. Solar panels have been placed on the roof to produce thermal energy for the bathroom, reducing energy consumption from the grid.