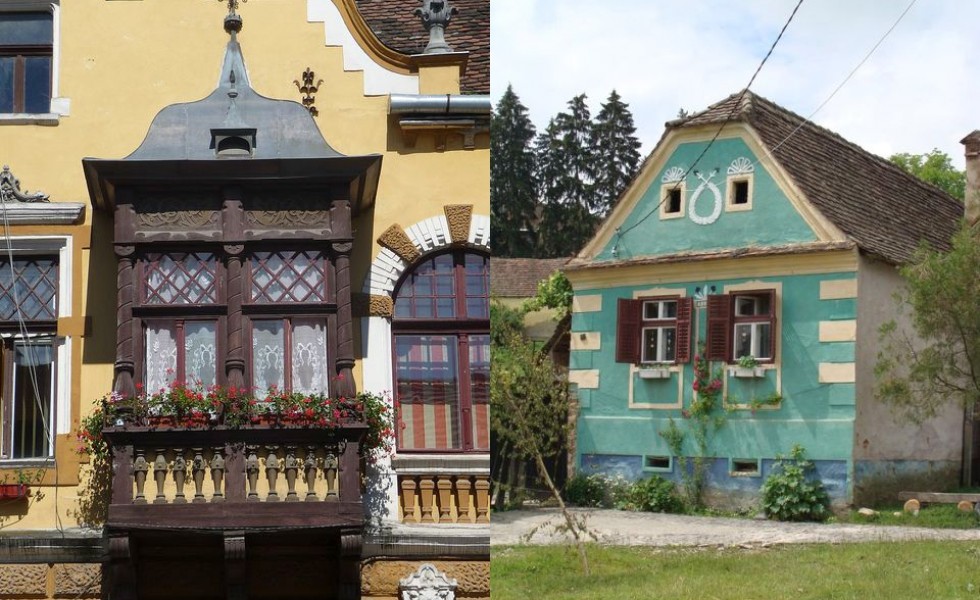 As one wanders beyond the Carpathians as travelling from the south, he enters a different world, including from an architectural perspective. Old houses, with red tile roofs, high and imposing front gates, big framed windows on the street facing wall which are the eyes and the ears of the household spreading behind the gate, often embellished by beautiful ornaments and motifs, are part of the Transylvanian cultural identity. If we have recently spoken about Saxon painted furniture, here is a close curios look at some Saxon style houses, old buildings but full of charm.

The first story comes from Brasov, central Romania, where a family bought an old Saxon house built in 1777 in the nearby village of Prejmer, renovated it and turned it into a genuine architectural jewelry. The house, bought in an advanced state of decay, was renovated by two craftsmen specialized in old Saxon houses restoration. They finally gave the old house the specific charm and unrivalled beauty, with the original pillars, both for decorative and consolidation role, heart shaped windows and Saxon motifs painted on the façade. The restoration works cost the new owner about 50,000 Euros, but the financial effort paid off with the house now on UNESCO cultural heritage list. In an article published in the British newspaper The Guardian, journalist Simon Jenkins speaks about “the forgotten Saxon world that is part of Europe’s modern heritage”. He points out this world consists of 250 villages and 7 towns and cities dotting southern Transylvania and calls on Europe to help in the costly renovation projects of these “intact monuments of a culture distinct and yet integral to European history”. Even though still anemic, such restoration projects grow in numbers, encouraged by Prince Charles’ example of buying and restore two old Saxon homes in the village of Viscri and as more and more Germans who left Transylvania decades ago return to find their roots. Well-known craftsmen in medieval times, Saxons transposed their craftsmanship into beautiful homes and other impressive structure, such as fortified churches and other protection structures, like wrap-around walls, against the Tartars’ invasions. Painted in diverse colors and aligned along cobblestone streets, the Saxon style houses with wood shutters radiate a mystic air, loaded with history, through each architectural detail.