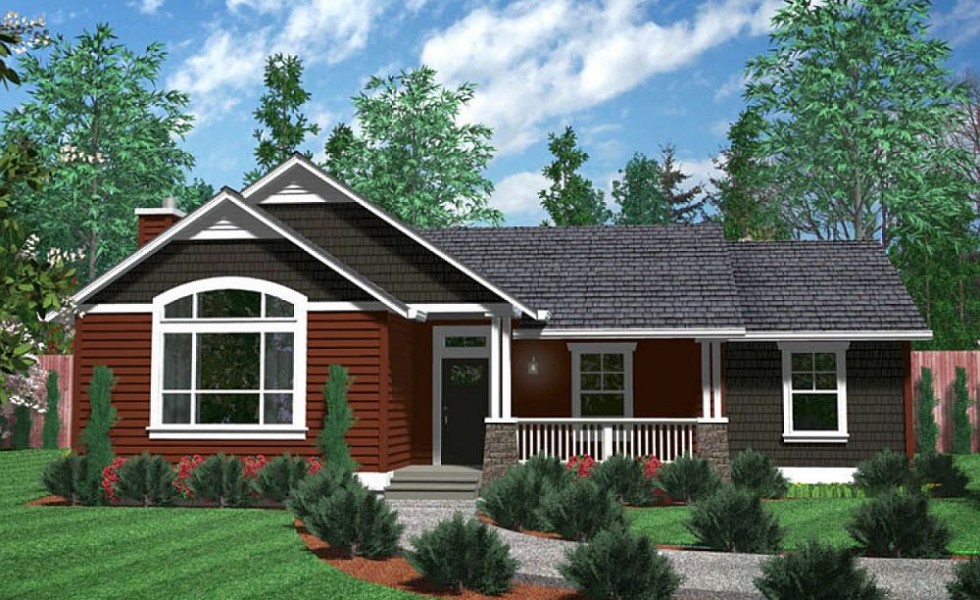 We have recently looked at two bedroom house plans that match needs of a family of three. Now are raising the bar a little and check out three bedroom houses but not going too far from the topic of practical houses, with low construction and maintenance costs, while answering needs of a larger family. There are some three bedrooms house plans for those of you planning to expand the family.

The first plan brings us an elegant house, with the focus falling on two bay windows, one to the front, one on the side, and as many pergolas imparting refinement. The single level house features a garage and spreads on a total area of 148 square meters. The living lies just behind the main entrance, with the seating area placed near the first bay window, connected to the adjacent kitchen and dining which feature the second bay window. Both sectors open up onto a patio. Three bedrooms and two bathroom complete the layout of this house that sells for about 450 euros/per built square meter. The second plan shows a house featuring a classic architecture with some design elements shaping a modern appearance. The house which sits on a total area of 128 square meters features the traditional layout, with the main living area as a single open space lining one of the sides of the house, while the three bedrooms and two bathrooms are on the other more intimate side. This house has a price tag of about 44,500 Euros at its semi-finished stage. Finally, the third example is a ranch style house, spreading on 127 square meters. Seen from the outside, the house appears to bring together four different volumes, with the last one being a covered patio. The kitchen, the dining and the living all come together in an open space, flanked by three bedrooms, two of them on one side. The master bedroom opens into a second smaller patio outside. This house sells for about 53,000 Euros.