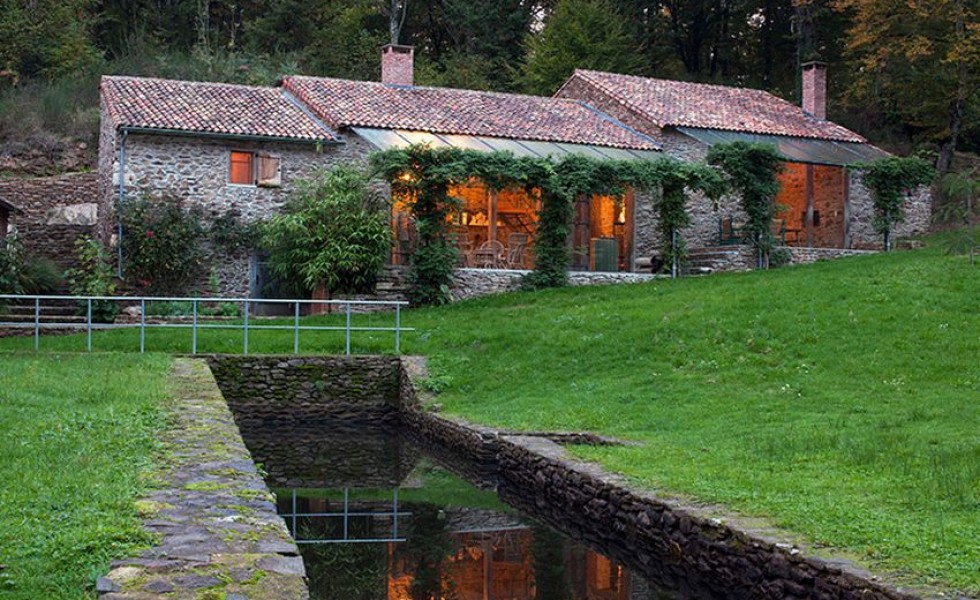 An old mill lying in the region of Dordogne, south-west of France, has got a whole new look, a complete transformation Dutch designer Piet Hein Eek, known for his scrap-wood products, worked on for about a decade. The old mill and its annexes now have been turned into holiday homes that visitors can rent.

The Dutch designer worked on the original structure of the buildings, keeping the old stone walls and terracotta tile roofs, but completely changing the interiors where he left a strong personal mark, furnished with Hein Eek’s furniture and contemporary artwork. The Eindhoven-based designer is best known for his scrap-wood products, where timber off-cuts are meticulously glued together to form armchairs, sofas, and prints for wallpaper. “Ruins have always been my great love and are just about the only form of property that I have pursued from small,” the designer explained to Dezeen.com The five star mill – diffuse light over the course of water The old mill lies in a superb country landscape and features a large veranda overlooking the river that was once a source of power for the mill. Over the course of the renovation process, the designer sought to keep all the refurbishments and extensions in line with the old stonework to create a seamless effect. The wood he used for all these changes was procured from the adjacent woods.

We have built in the tradition but in a way as one would have done it then now,” he said. “Stone, wood, concrete, glass, stone; the houses are in nature and from nature. Everything is detailed, almost everything is new, nothing stands out. It is not an architecture to stand out, or even to think about. It is rather architecture to fall away and above all to stay in,” Eek added.

The bare stone walls were covered with colorful art works, one of them being constructed by Eek’s wife from the discarded lids of camembert cheese packaging. In the living and the dining that spread on the ground floor, the Dutch designer opted for branching chandeliers which impart a touch of elegance to the rustic and seemingly inert rooms. After finishing the project in Dordogne, Hein Eek is currently working on the restoration of several other structures including a Friesian farmhouse and a former industrial building in Rotterdam.