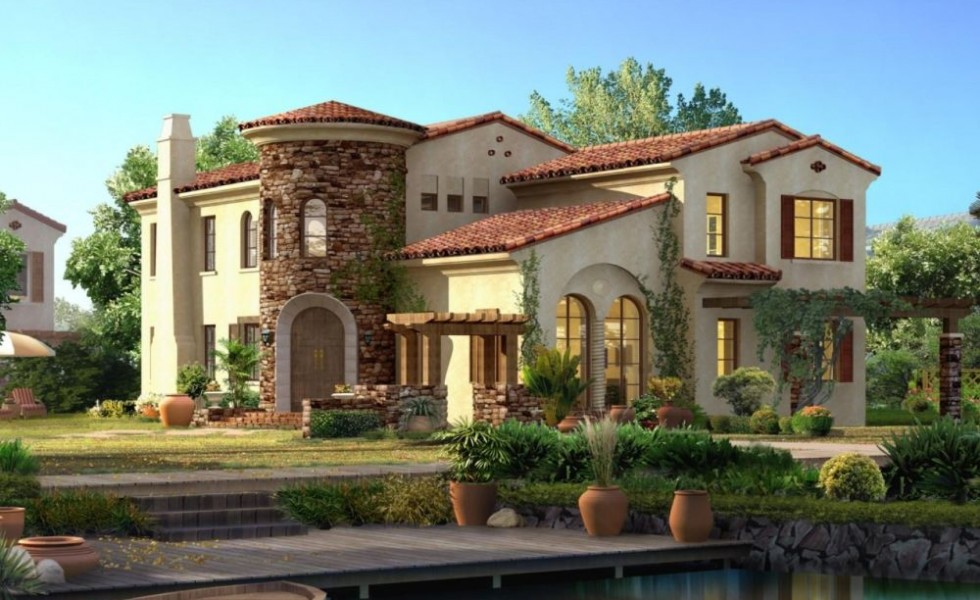 The Spanish style brings forms and features of the old colonial style, a combination of heavy ornamentation inspired by the Spanish and Moorish architectural traditions, with carved and shaped columns, stucco exterior, low-pitched tile roof, wrought iron details at the windows and doors, arches above them, and tiled floors, sometimes in elaborate patterns. Below are several Spanish style house plans outlining massive homes which exhibit an exotic air.

The first plan is a spacious home, spreading on a total area of 350 square meters. The two story house has four bedrooms, five bathrooms, a spacious living which adjoins a dining and a kitchen and many other rooms with various utility, such as a study. The generous interior space expands outside by means of terraces, balconies and loggias of distinguished beauty. The stucco and stone façade, under the tile roof, arches above the main entry and the large high windows – they all exude an open and elegant Mediterranean air. The second example is a house with a similar surface, about 358 square meters, but extended on three stories. The ground floor is entirely dedicated to family spaces, a living, the dining, the kitchen and another room for socializing activities. The three bedrooms and a study lie on the first floor while the third level features a bonus room where the owners indulge in hobbies. The house stands out in the architectural landscape around through its yellow stucco façade which contrasts with the door and window frames. The third plan describes a Spanish style house which distinguishes itself through the same fine contrast between the red tile roof and the stucco and stone façade, a house which seems to be visually balanced by the two twin turrets in the back. Sitting on 406 square meters, the house features the same generous spaces dedicated to the family on the ground floor, completed by terraces and external loggias that go all the way up to the third floor. The two turrets house a bedroom and the stairs.