Scottish House Designs. The Best of Tradition and Modern Living 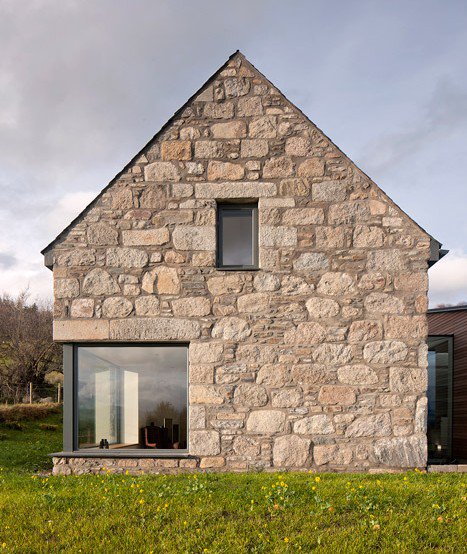 When we think about Scotland, we see those stone houses on green fields in the countryside, in a rather austere, but charming scenery. Some of these houses were preserved and even reconfigured to fit present day life requirements beautifully. Here are three Scottish house designs that speak of tradition and comfortable modern living brought together.

Here is a traditional cottage with thatched roof from the Hebrides. Built in 1880, it was completely restored and equipped for accommodating tourists on the island, including such facilities as TV and WiFi. It has two bedrooms, with 3 beds, a bathroom, small kitchen and a living room. The architecture, furniture and decorations present a lot of traditional elements, but the equipment providing the utilities is all modern. A modern timber and glass structure connects the more traditional stone-walled buildings at either end of this house in the Scottish highlands. The property for a single occupant replaces a derelict cottage and farm building on a hillside site. In the main stone building there are the master bedroom with bathroom and two small living rooms, then glass facede building in the middle comprises a large kitchen and dining room, while the stone cottage that follows is made up of two guest bedrooms with bathrooms. The blackened timber walls of this family holiday home are hidden within the shell of an old stone mill in the Scottish countryside. The roof and interior structures were beyond repair, so these were stripped away to create a hollow shell within which the new house – called The Mill – was built. The original walls were repaired using pieces of stone from the site and re-pointed with lime mortar, while the new timber structure is clad in black-stained wood intended to be visually subservient to the stonework. Indoors, panels of spruce plywood line each of the rooms, while a house-shaped core containing storage areas is coated in a layer of white plaster. Floors are covered in a combination of pine boards and polished concrete, depending on the use of the room.