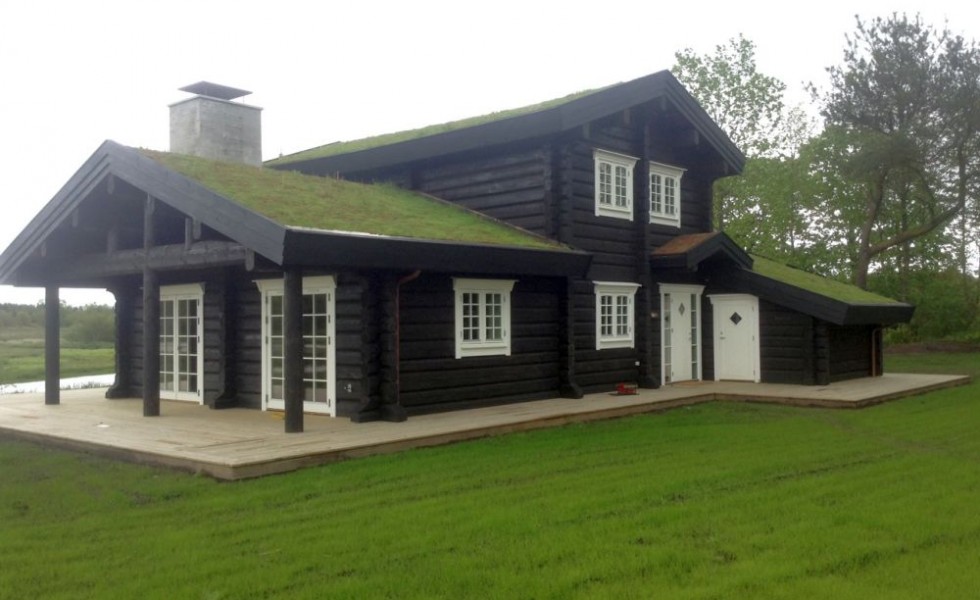 Wood is the construction material of choice of Scandinavians. No wonder since, besides the fact that is found in abundance, wood brings much-demanded comfort thanks to its insulation qualities, but also a touch of aesthetics in the harsh North. From traditional up to the modern design, wood molds obediently to all the architectural lines, perfecting the functionality of a house. Here are some Norwegian wood houses, passing through each architectural school from those mentioned above.

The first example is a traditional house made of wood, which can serve both as a permanent home or vacation retreat. The house with an area of 118 square meters consists of two bodies that are interlocked, one of them on one level, the other spreading on two stories. The house is built entirely from wood, which shows his true aesthetic value on the inside, where it binds in forms filled with expressive character. On the outside, the roof covered in grass gets all the attention, integrating the dwelling perfectly in the natural environment. Downstairs, the home features extended day time spaces including living room, dining room and kitchen, with two bedrooms in the other corner. The other three bedrooms lie upstairs, the main one opened to a front balcony. The second example is a wooden house on three levels, built in a neighborhood on the outskirts of the Norwegian capital Oslo. It is a house that blends traditional with modern styles, in a symbiosis which gives it distinct personality. The place is partially buried in the slope of the hill which gives it a vantage point and stands out thanks to its large windows, some of them highlighted by original green-yellow frames. The interiors, which offer impressive urban views of the Norwegian capital stretching below, are clad in natural color wood, invaded by natural light. Finally, the last example comes in a modern design, too, with bold forms smoothed by the gentleness of wood. It is a vacation cabin, overlooking a Norwegian fjord, just in the heart of nature, in the midst of a rocky landscape, which gives the place a general fascinating appearance. The cabin is open to the outside through wrap-around glazes with living spaces lying on different levels, somehow following the line of the terrain. Inside, the wood and the concrete blend harmoniously into a space that radiates a perfect calm.