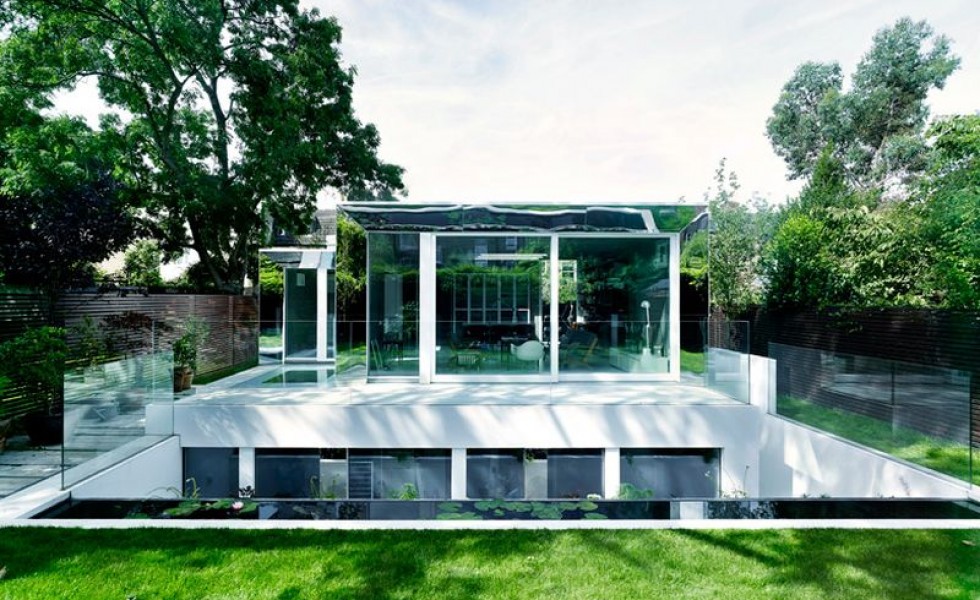 When Deborah Saunt graduated from her architectural training, her mentor have her an important piece of advice. “She told me that if I ever wanted to build my own house in London, I would have to go out and buy a property with a large garden, resell the house, and keep part of the plot to build on”, she remembers, telling her story to The Daily Telegraph.

She did as advised. The commercial trick would help her save money and also challenge her imagination and creativity to build on the small plot of land. In 2007, Deborah and her husband David, also an architect, found a property in Clapham, south-west of London. They sold the Victorian style house right away and kept the garden to build on the plot. Deborah and David were left with a site measuring approximately 40 x 65ft – and guarded by fierce conservation-area restrictions. “It took two applications and an appeal to achieve permission. It was a wearying three years,” she said. The subterranean house – the half above the ground

To meet the strict building regulations, they were only allowed to build a small garden pavilion so, in order to build a home for a family of four, they had to build beneath the ground. This is how the Covert House came into being, a suggestive name for a partially buried house. The house spreads on 1,615 square meters and features an inverted layout. The structure is made of cast concrete, which informs the palette of concrete-grey and white that runs through the house. The owners decided not to paint the walls, relying on the beauty of the wall imperfections. Even if underground, some of the room are well lit by skylights on the ground level.

At the same time, to mitigate any sense of being underground on the lower level, incorporating two courtyards that serve as light wells. As a consequence, the interior is richly lit, as can be seen in the images below, and the grey concrete walls play a great role in propagating the natural light flowing in. The south-facing courtyard has an inbuilt planter, which ensures that greenery is always within sight. The two architects say their house is also a manifesto for a more permissive legislation when it comes to building, especially amid a severe housing crisis in Britain. “We should be unlocking more backland sites to address the housing crisis. This is our clarion call to government – they need to let people build low, unobtrusive houses in back gardens around the country”, Deborah explained.