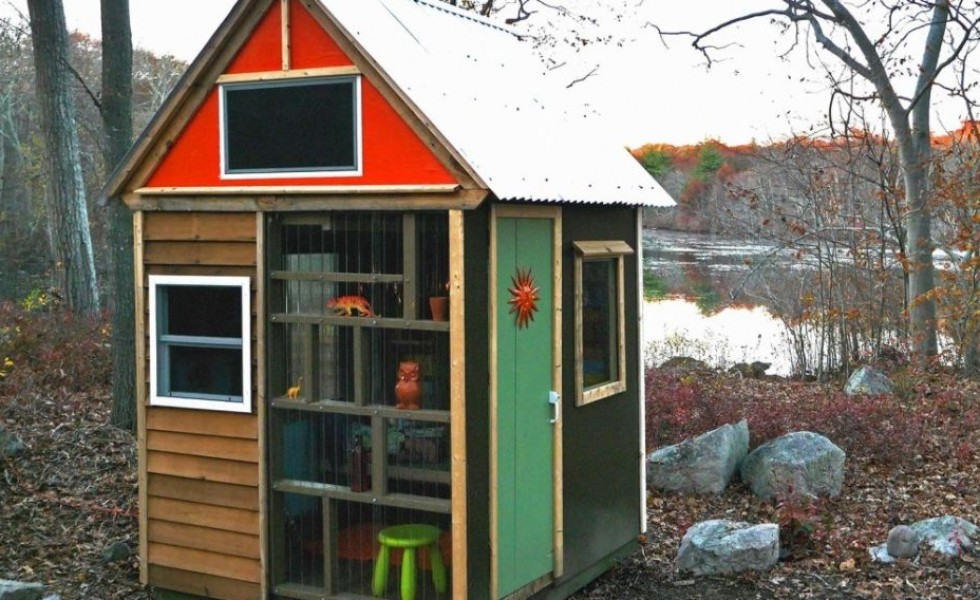 The tiny house fever seems unstoppable. Regardless of their social status, people are becoming more attracted to the idea of withdrawing into these very small spaces in order to discover a new side of theirs, the one craving freedom and a whole new life style entirely different from the majority’s. We have presented and we will again present tiny house projects as idea roam free, just as does people’s desire for a steep change. Today we will take a look at a tiny house built by a group of eight year olds with a view to draw some funds for their scout club.

The kids from Stoughton, MA, were guided through this project by Derek Diedricksen, host of HGTV’s Tiny House Builders and author of Microshelters. Under his leadership, the boys helped design, build and paint the small structure. Not only that, but he also taught the boys how to source and use salvaged materials, making their project slightly more challenging. He told website Inhabitat.com that he wanted to show the children they can also build strong and lasting structure other than bird feeders. The house is indeed very small, probably the tiniest we’ve ever encountered. It lies on less than 1 square meter, but displays a closely-knit structure with colorful surfaces that give it some personality, while open to outside through some polycarbonate sheets. The house also features a loft where a child can easily rest. While the team hoped to add a composting toilet and bathroom to the tiny house studio, they were limited by time and materials. The builders, including their guide, say the tiny space could make for a great play space, mini art studio, backyard office or even a seasonal guest bunk house. With the right equipment, you could also toss this up into a well-built tree platform to make a unique tree house

The tiny house is now exhibited at a local museum and awaits to be auctioned. The scouts hope to raise 2.500 USD. Even though money may seem important, what is left behind is the power of example showing that salvaging old materials can both help nature and you getting a both aesthetical and practical structure. The scouts’ tiny house – it can be a play house, a creation studio or even a study in open nature