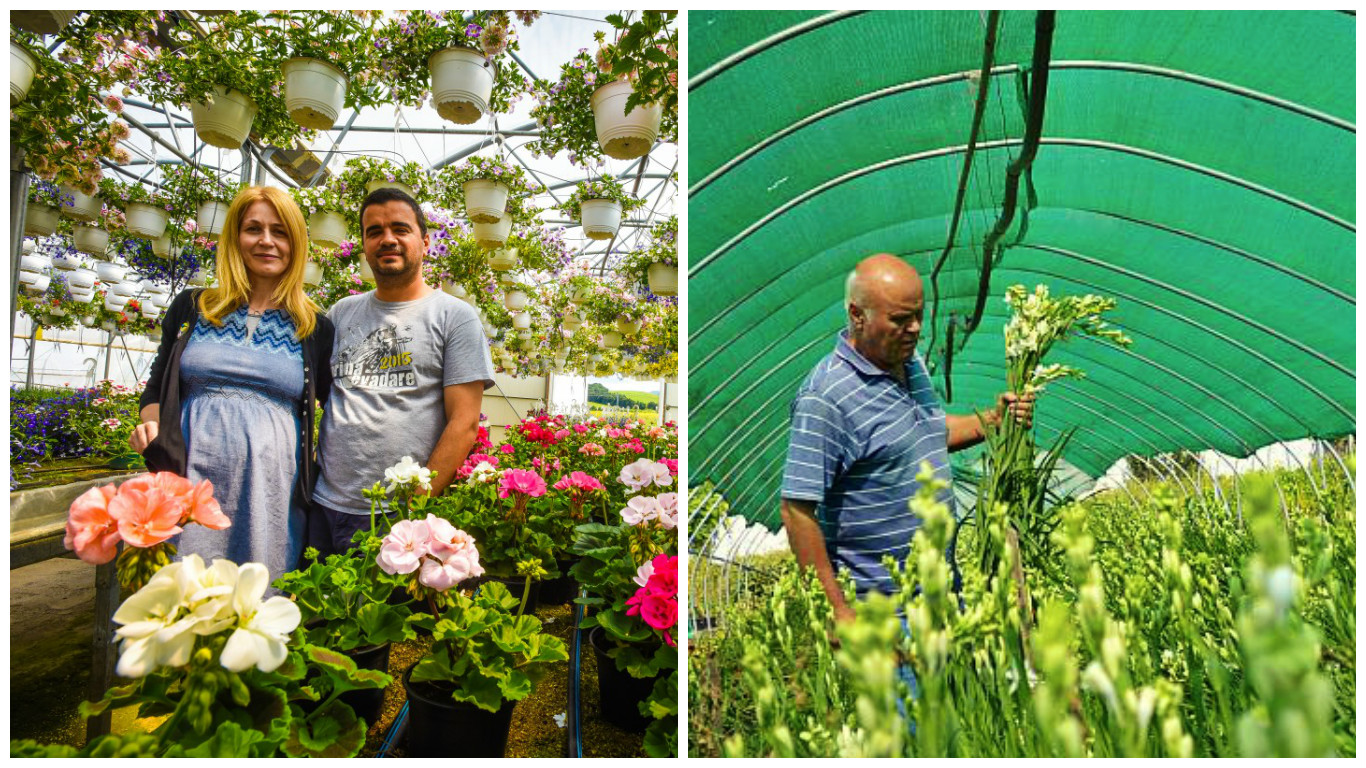 Growing flowers is one of the most beautiful and profitable businesses in agriculture. For a start you need an initial investment, as in any other field, in a solarium, but you will enjoy constant and more and more diversified demand in this business. Here’s what investors have to say regarding their successful flower growing business.

Mihai si Adina Mara moved from Bucharest to Ciorogarla, a nearby village, 10 years ago and decided to invest into a farm for a decent living. Initially they planted both vegetables and flowers in their solarium, but having only a small area available they decided to grow just flowers. Their company, Bisolaris, is among the few of this kind outside Bucharest.

The first contract was with a firm involved in landscaping for the city hall of district 1 Bucharest. Now they trade with in bulk suppliers, or just people that purchase the flowers for their gardens or home decorating straight from the solarium.

Once they had their first big contracts, the Maras realized that they had to make some serious investments and update their solarium.

“We have the best quality solaria from Italy, with the best build-up and covering. We are satisfied with them and we were confident to start selling them to other producers. Practically, we started another business, beside the flower planting, for ourselves”, says Adina Mara. Add to this the costs of growing the flowers in itself. The heating is 3,300 euros a month in winter. One truck of planting soil is 6,600 euros and 3 are needed every year, the planters are another 13,200 euros a year. To all this adds the cost of the seedlings. There are seasons when certain types of flowers sell well.

“Around March 1st we sell primula, hyacinth and cyclamen and then from half March, through April, May and half June, we sell the remaining sorts of flowers. Part of the sales must be invested in winter time resources. Then, there’s another selling turn with poinsettia”, says the owner of the solaria in Ciorogarla.

Regarding the sales, they cover the planting costs with an extra percent added. “Some flowers are more expensive, others cheaper, but the percent we add to the production cost is pretty much the same. For example, for one poinsettia we established the production cost at 1.5 euros and we sell it with 2 euros, so our accretion is 0.5 euros. Spring flowers are cheaper and the accretion is just a few cents, but in this case we sell in larger quantities”, says Adina Mara. Successful flower growing business. “We found our occupation for retirement”

Nicoleta and Dan Vasile, from Bucharest, gave up the tumultuous life in the capital and decided to move to Sibiu to open a flower conservatory. Few kilometers from Sibiu, in Poplaca, lies the couple’s flower conservatory – Camelia’s.

“We were prepared to make deliveries ourselves and did not expect that people from Sibiu would come to buy flowers from us. We had a huge surprise. When the season comes, we have 150 clients daily, the parking lot is beyond full. I think we found our occupation for retirement”, says Dan Vasile. Dozens of flower cultivars can be found here. For the production they never use seeds, because a good quality plant never grows from seeds.

“There are professional companies for seedling production, in the Netherlands or Germany. We grow them and bring them to their maturity. Despite the appearances, it’s not an easy job, if you want good quality flowers, you have to use the latest high-end products as well. Why flowers? It’s enough to look around and realize how beautiful it is to do this every day”, adds Dan Vasile. Florentina and Vasile Palasanu from Galati worked for 10 years in Italy and, with the experience and money they’ve earned, they started a flower business. Up to now, they invested more than 100,000 euros into a modern conservatory, that occupies 2 acres, in Vanatori village. Currently, there are 20 employees working there and everything is automatic, starting with the soil moisture control program to the roof open-close one.

The prices start at 0.5 euros for a pot of pansies or petunia and reach up to even 9 euros for a begonia. The cheapest shrub is thuja, which costs 11 euros. The most expensive are the palm trees that go up to 330 euros.

Successful flower growing business. The Romanian who sells peony to the Dutch

When the entire country brings in trucks full of tulips, Gheroghe Teodorescu, an engineer, started to bring in bulbs and grow tulips in Lehliu Gara, in the south of the country. The business flourished and his company’s conservatory in Lehliu, Fresh Flowers, is today renowned as the biggest tulip producer in Romania. However, it’s not tulips that are Teodorescu’s biggest pride, but the peonies. He managed to get them across the borders, precisely to the Netherlands. Every year, he plants an entire hectare with all colour peonies, then harvests them when in bud, and transports them to Holland, for the famous Aalsmeer Flower Auction.

“This year we managed to obtain a record price of 1.46 euro for every peony grown here in Lehliu”, Teodorescu said in 2015.

For planting one hectare of peonies one needs 30,000 rhizomes, and each rhizome costs 1.5 – 8 euros, depending on the cultivar.