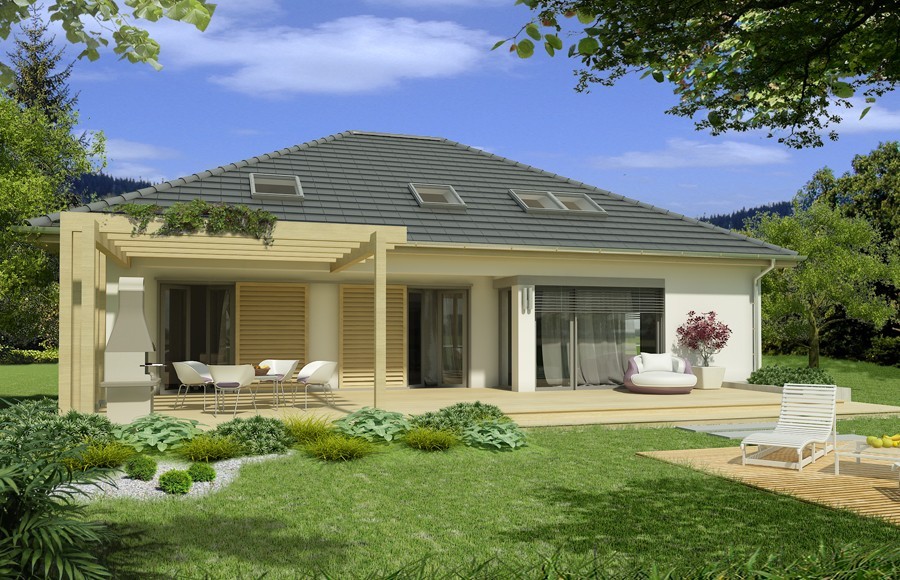 The first chosen house has a balanced design with a delightful symmetrical façade and a pair of columns walled on one side and another of the entrance. It has a useful area of 133 square meters. In terms of sharing, the house has four bedrooms and two bathrooms that are located along a hallway. The two bedrooms in the back exit the terrace through the elegant glazed doors, just like the living room. The kitchen is open to the living room, which separates a bar with four seats. The price of the turnkey construction is slightly over 60,000 euros. The second model is a house with a traditional architecture and roof in two waters. In terms of costs, the construction has a price of about 40,000 euros to the key, if you opt for the metallic structure and about 43,000 euro, if you choose a wooden structure. The house has three bedrooms that are aligned on one of the sides of the building, and for more quiet, the living spaces are merged to a place opening on the rear terrace. The third example is a beautifully decorated house at the foundation level and around the entrance with the apparent reddish brick, in tune with the roof and in contrast to the white walls. It has large windows and a terrace in the back of which walls are all dressed in brick. Its useful surface is 130 square meters, and the price of the turnkey construction is 62,000 euros. It has the garage in front, which reduces it from the width and a technical space in its extension, in line with the vestibule. From there you can enter the small salon, with open kitchen and dining place in the back, from where it comes out on the terrace, or in a hallway that leads to the three bedrooms, bathroom and sanitary group.