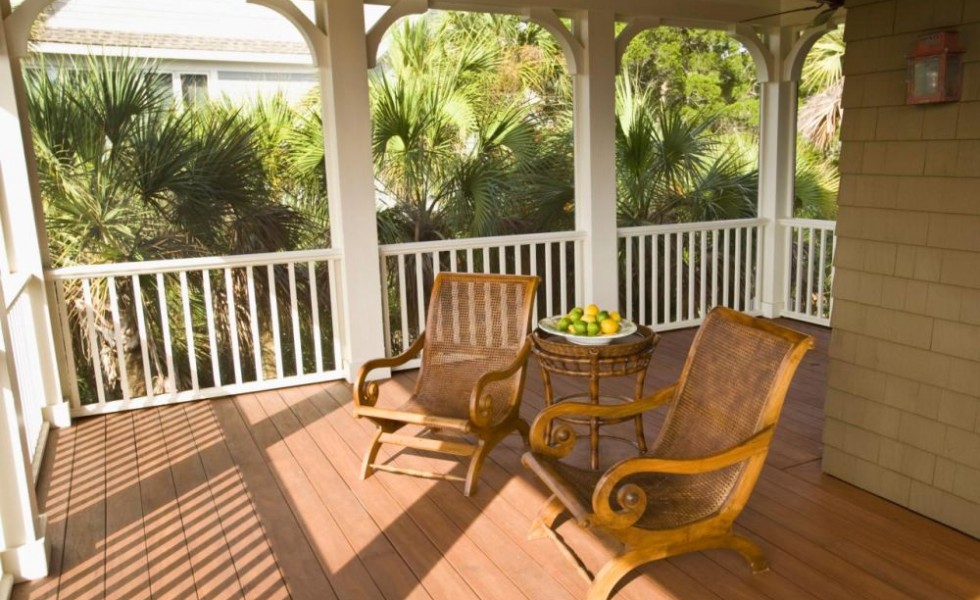 A house with a porch blends two essential aspects of a home: a diverse architecture, which lends personality to the place, and, more important, a supplementary space with a various utility that can fit the needs of the owner, including the creation of a new living wing. Consequently, a combination of practice and aesthetic which can only work to your advantage. Below are some wood porch house plans, featuring a different design, but all displaying the same open air thanks to the space preceding the entry.

The first example is a house entirely built from fir wood, featuring 4.5 cm thick walls and spreading on 96 square meters. It is a house which the builder says can be erected in six days, displaying a classic architecture, typical to wooden houses, but featuring extra elegance thanks to the wooden porch which expands into a deck in a corner. The plan is practically set up so to include all the necessary spaces, such as a living which also engulfs the kitchen, two bedrooms and a bathroom. This small, but chic house sells for 12,300 Euros. The second plan is a Romanian traditional house, girdled by a superb porch which expands into a deck on one side of the building and a second wood columned porch, full of character. The single level house spreads on 95 square meters and is structured into a living, lying at the back, with access onto a terrace, along a kitchen. Three bedrooms rest in the front sector of the home, two of them opening into the veranda which runs all across a side. The architect assess the price of this home as standing between 60,000 and 80,000 Euros. Finally, the third plan describes a wooden two story house spreading on 164 square meters. The house, despite its traditional design, displays an appealing play of volumes which impart an overall pleasant and dynamic look. A front gable comes with a chic balcony and an underlying veranda, both exuding extra elegance. The ground floor is entirely dedicated to family spaces, in two distinct rooms, with access to the afore-mentioned veranda. Three bedrooms rest on the first floor, one of them housed by a separate wing, open to a spacious balcony.