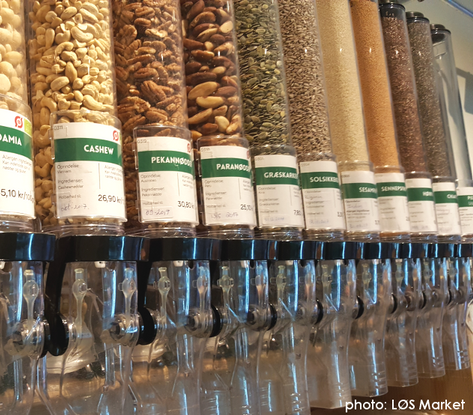 After the stores opened in France, London, Berlin, Copenhagen and also Austin (US), a new grocery store selling exclusively in bulk, package free, goods opens in Stockholm this August. This zero packaging grocery store will be called WasteLess and run by two young people that had this initiative, an Englishwoman settled in Stockholm and a Swedish guy. The concept has by now been imported in Eastern Europe as well. In Romania there’s a similar shop in Zalau (north-west) opened in 2015.

“We want to reinvent the way we shop today, and offer a real alternative to the wasteful ways of the established supermarkets”, say WasteLess initiators, on the shop’s website.

Everything in this shop will be sold in bulk. Shoppers will have to bring their own containers, which they weigh as they enter, then they fill them with what they need, in the amount they desire, and in the end they only pay for the food, instead of spending on packaging as it’s usually the case.

Giving up individual packaging we only use once is a huge favor we do the environment, eliminating pollution and saving the efforts that go into producing the packages, collecting and destroying them, but also a favor we do ourselves, cutting out costs and saving our own efforts of managing so much garbage.

Plus, we are free to buy whatever amount we desire, suited to our needs, which helps minimize food waste (1.3 billion tons of food are wasted annully) for which households are a third responsible, along with stores and restaurants.

“Dealing with waste once it exists can only take us so far – else we would have recycled ourselves out of this mess already! It is time to rethink, it is time to take care of our waste before it becomes a problem – how? By not creating any!”, according to WasteLess.

Here’s a video promoting this concept, shot in similar stores in Malmo, Sweden, and Copenhagen.