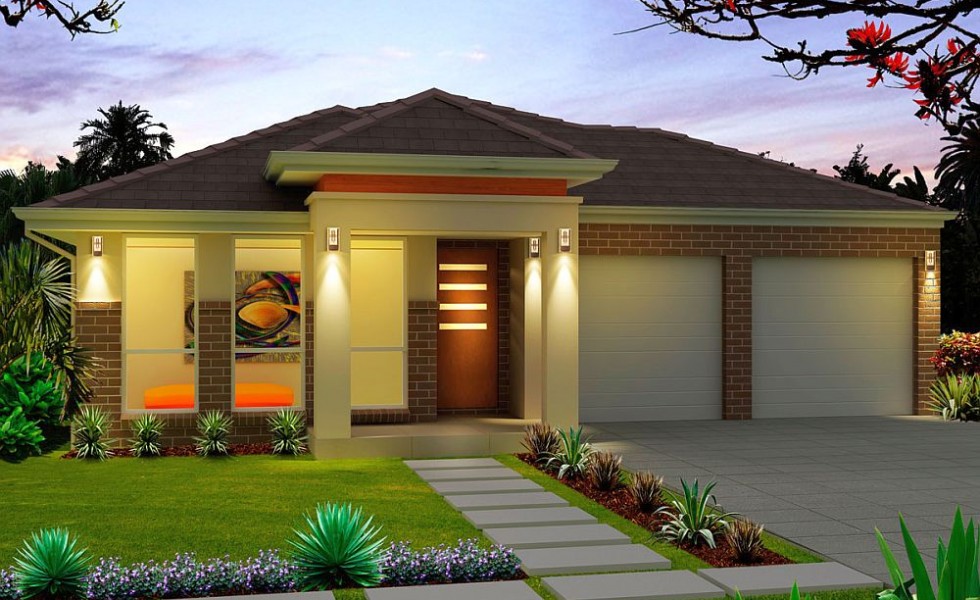 The ideal space is the one that best and practically answer your needs. What is extra also means supplementary expenses so, if you’re looking for a home, weigh the situation well. We have often described single level houses as being practical and comfortable homes which you can rely on if you have a small family, 3 members in our case today. So here are some new two bedroom single story house plans to inspire you in making the right choice.

The first example shows a house with a total living area of 112 square meters. We tend to believe this a traditional design house, given the overall appearance, but the vertical glazings impart a note of modernism. The simple design and the small size recommend this house for a family just starting out, while it’s equally suitable to an elderly couple who seeks to avoid climbing stairs. The two bedrooms are completed by an open space living area which spills into an outdoor patio. The turnkey price ranges from about 47,000 to 67,000 Euros, depending on the finishes. The second plan shows a house sitting on 98 square meters. It is a house featuring a classic architecture, with a hipped roof, personalized by modern elements such as the same vertical windows and ornamental brick clad areas, as seen in one of the design ideas. The interiors are well delineated, divided into a main living area, an open space which includes the living, dining and kitchen with access outside, and the private area represented by the two bedrooms, with the bathroom, hallway and a technical room in the middle. This house sells for 36,000 Euros in the semi-finite stage. The third example describes a house which features a distinct chromatic note, consisting in a fine contrast between the roof and the brick ornaments and, respectively, the whitewashed walls. The house has a living area of 95 square meters, with the two bedrooms lined on one side for extra peacefulness. The living areas bring together the living and dining in the same space which connect to a patio outside, the kitchen lying separately. The turnkey price ranges from approximately 46,000 to 62,000 Euros.