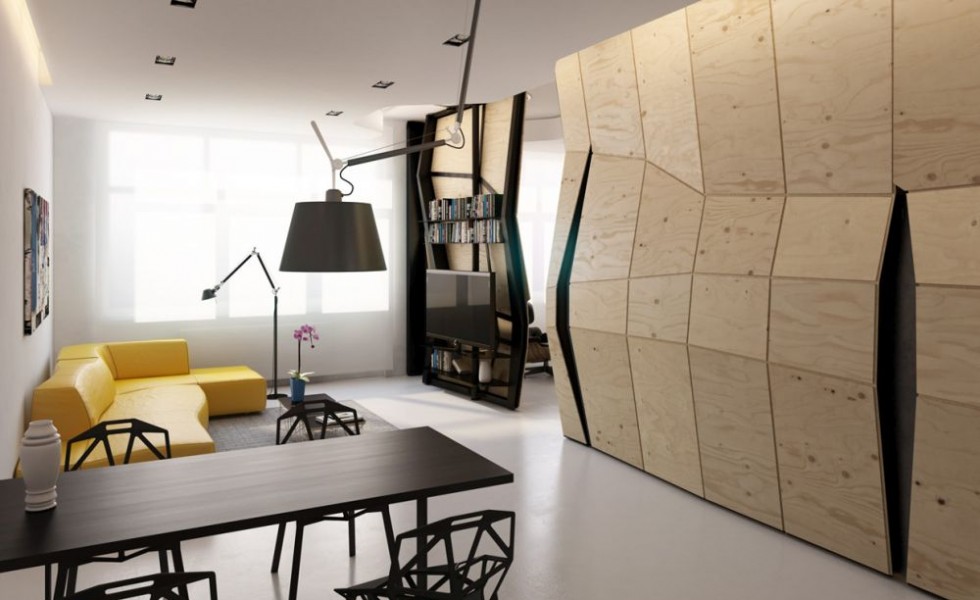 Small spaces have always frustrated us, without knowing, however, that we can appease them by using colors, furniture and accessories. Any room can gain scale in our eyes if we know how to expand its physical limits and transform it into a place that makes us feel good in the end. Today we will talk about transforming a studio apartment, using means at hand and solutions that allow you to share the space with someone else, while keeping a degree of intimacy.

The first example comes from New York where the two friends moved into a studio apartment of 65 square meters. Because each wanted his room and, considering that space had several windows, the two decided to divide the space in two bedrooms, sharing the kitchen and the bath. Said and done. After just a few weeks, the two spaces were already finished and each minded his private life. The bedrooms were separated using wooden stud frame walls and then insulated them using plasterboard. To gain as much space as possible, the two lofted their beds up in the air using the space below for storage. Finally, they installed doors. Transforming a studio apartment – one of the bedrooms

The second transformation comes from Russia, where a young architect divided a 60 square meter studio in more rooms, as you can see from the plans shown below. He used a sculptural structure, a moving wall, to delineate the new rooms, an ingenious solution that turned the living space into a functional one. Moreover, the wall of steel structure and covered with plywood has also become a useful storage space, as you can see from the next pictures. The folding structure was also used to camouflage the cooking area in the kitchen. Transforming a studio apartment – a bookshelf inside the wall The last example comes from Spain where an architect created bulkheads, walls that slide on a rail, to transform a tiny studio apartment into a several room home. Moreover, the architect used pieces of furniture as moving walls, outfitting the ceiling with industrial tracks. She can thus create rooms by rolling these storage units into a variety of configurations and turn her space into a dressing room, sitting area, boudoir, or kitchen depending on the need. Tags: apartment turned studiohow to turn a studio into an apartmentTransforming a studio apartment