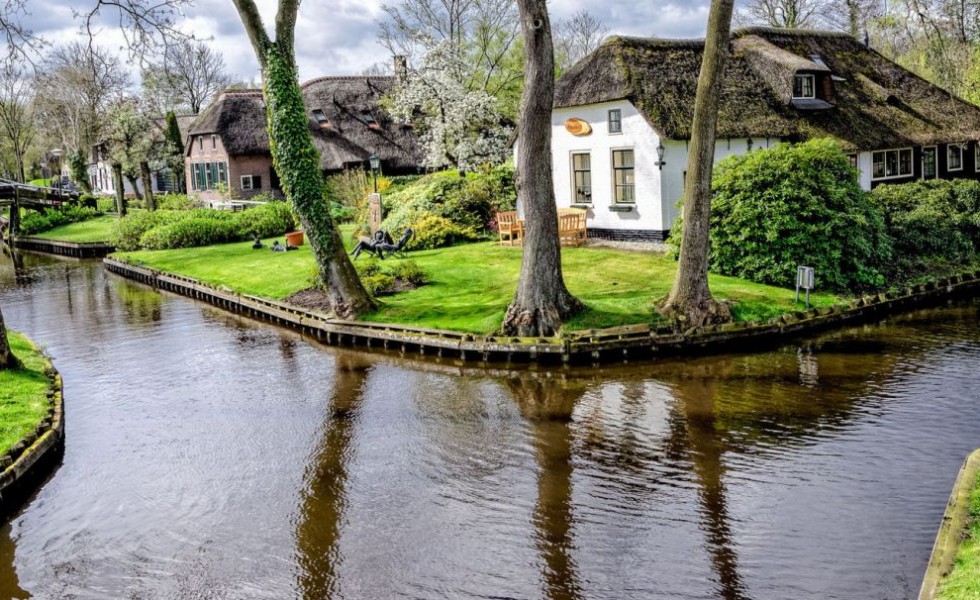 When you first see the images, you are totally convinced this cannot exist on the face of the Earth. The first impression that strikes you is that a pastoral landscape has just descended from a fairy book, with the colors and shapes so naturally combined and outlined they seem drawn on a piece of paper. In reality, what you see below is a small town in Northern Holland, Giethoorn, built upon a network of narrow canals.

Giethoorn, a town with a population of only 2,600, is the kind of picturesque, tranquil village most people can only dream of. Even its website says that “the loudest sound you can normally hear is the quacking of a duck or the noise made by other birds”, no wonder people flock here to find the ultimate tranquility.

The postman delivers mail by means of a punt – a traditional flat-bottomed square-cut boat), steering along the canals which here and there intersect in natural crossroads. Wooden bridges span the canals all along while there is one or two boats moored near every house, just like cars are parked on driveways or along the street in the classic towns. The town is nicknamed “The Dutch Venice”, but locals say this may give a false impression of size and crowds and commercialism in a small settlement wrapped in a total tranquility. Boating has been a popular tourist attraction here for years, with 90km of canoe trails and scores of motorboats to rent, but now, instead of conventional outboard motors, the hire shops stock so-called “whisper boats” – dinghies driven by electric motor. Giethoorn’s name originates from the first inhabitants’ discovery of hundreds of goat horns (gietehorens) in the marshland, remnants of a 10th-century flood.

As the town’s reputation has spread across the world and the number of tourists has gone up, many hotels and restaurants have turned up along the canals, among the thatch-roofed traditional houses. There are also three canal-side museums to visit and the Schreur shipyard, where the traditional Giethoorn punt is built. Footpaths beside the canals are ideal for walking and cycling, with easy access to the many restaurants and cafés.