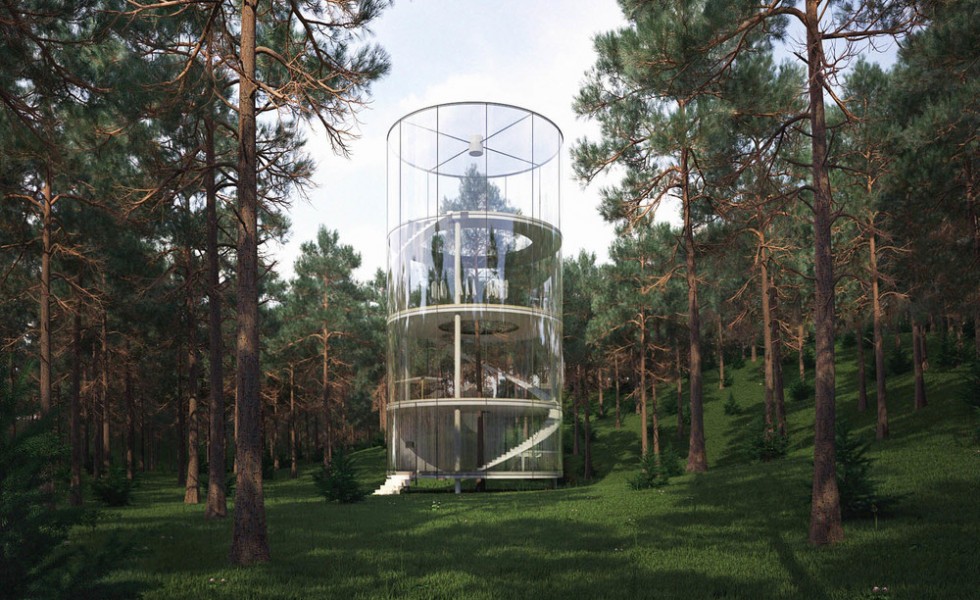 The title of this article could have as well been “the house in the tree” or “the tree in the house” because any of them would have matched the reality, at least the conceptual one, the stage this project is now in. the tubular glass house bears the signature of a Kazakh architect, Aibek Almassov, who says he has already found some investors to build this bold project, for now only on paper.

The house was designed to be built right in the middle of nature, hence the breath-taking 360 degrees views it boasts. The architect says his creation is meant to provide a viable and captivating alternative for the dwellers of the big cities who are tired of “sweltering concrete boxes”. An investor was initially secured when the project was first designed in 2013, but they subsequently pulled out and it seemed the project would never be completed. But a glass and solar panel manufacturer is now interested, according to Almassov, so construction could be imminent. The tubular glass house – impressive views over the tree tops “The main purpose of this project is to offer an alternative to the bustle of city life,” the architect told Dezeen, a website specialized in contemporary design. “We wanted to combine the capabilities of modern industrial design and the natural wealth and beauty.” What is even more important is that this building doesn’t harm the environment at all, he added. The tubular glass house – a real incursion into a spiritual sphere The house features for ring-shaped floors, connected through a spiraling white staircase that wraps around the trunk of the tree in the middle. Glazed balustrades with wooden railings will surround the atrium on each level so as not to block the views. Almassov likens climbing these stairs to a spiritual purification and enlightenment. A glass shower cubicle lies on the first floor, the second houses the living spaces while a bedroom would be placed on the third level. The last floor is reserved for a seating area since this space boasts the most beautiful views over the tree canopies. The tubular glass house – a slice of this eccentric building