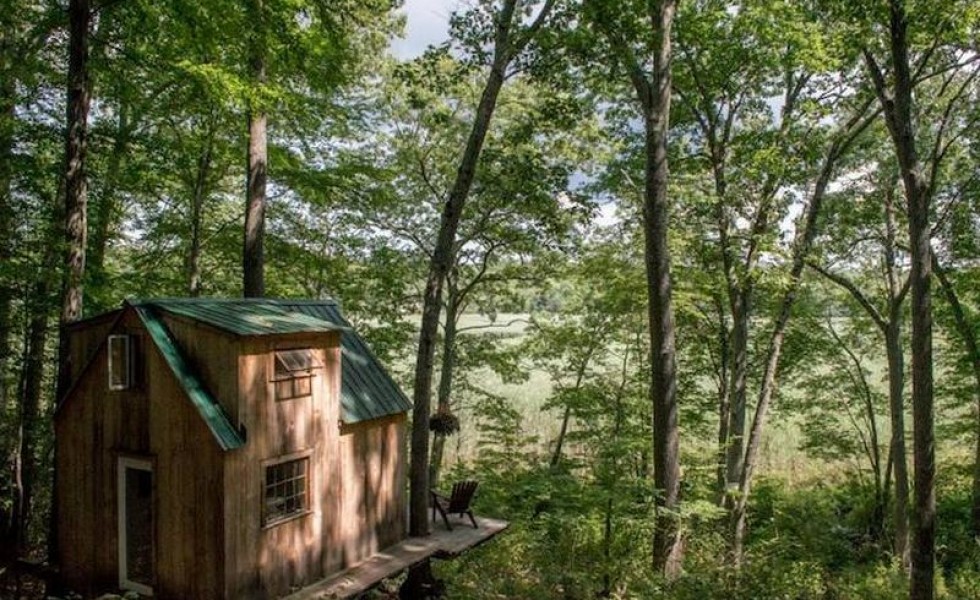 Freedom desire knows no limits! It’s been proven by a young American carpenter who sought and found freedom where some least expect it – in the middle of woods. In his case, happiness took the shape of a wood cabin, partially suspended, a modest, but chic house. Below is the story in brief of the young man who found happiness in simple things, built by his own hands.

Dave Herrle of Westbrook, Connecticut, graduated from a liberal arts college and then ended up having a desk job which he says he hated from the very first and till the last day. His inspiration came while hiking in the wilderness of the Appalachian Mountains.

This experience is told by him in very eloquent words, as quoted by Treehugger.com: “In 2007 my life changed dramatically after hiking the entirety of the Appalachian Trail. It was a gut check in life and I’m lucky it happened when I was 27 and not 67. My time in the woods gave me a perspective on the benefits of simplicity. It was in the woods that I promised myself that I wouldn’t spend a lifetime doing a job I didn’t enjoy”. The first step towards the much-sought freedom was building a wooden cabin, right there, in the middle of the woods. His fiancé was by his side and the team work paid off.  Amazingly, Herrle was able to construct this tiny cabin of 11 by 14 feet in the woods for only $4,000 and in only six short weeks. The rustic interior is and the house itself is sited on a hillside porch that wraps around some trees and juts out 12 feet high off the ground on one side.

The cabin is got all the necessary utilities for a decent living while the sleeping area was positioned in the attic which gets plenty of natural light through a wide window, right above the sliding door which opens the interior to the suspended terrace outside.

Impressed by Dave’s story and achievement, many youngsters are now turning to him to get similar tiny cabins in recluse areas, far from the craze of the cities. Herrle is now well on his way to building more tiny houses for other clients and other projects that he’s passionate about. You can check his work by visiting his website at ul Herrlecustomcarpentry.com