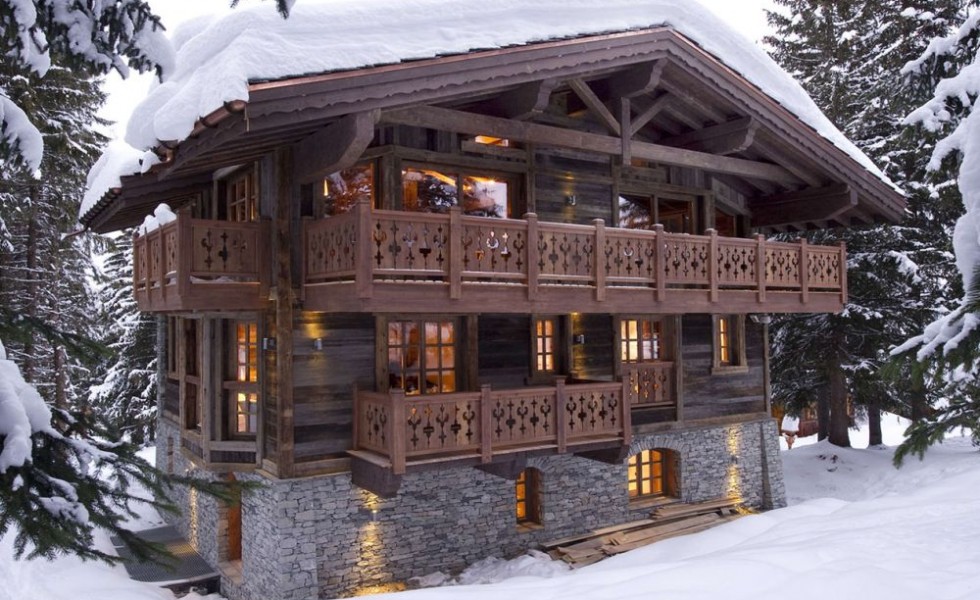 The chalets in the Swiss Alps have always fascinated us thanks to their simple design, yet perfectly integrated in the mountainous landscape. Featuring prominent balconies to the front, which open the interiors to the lavish nature outside, fine decorative woodwork, such as balcony and porch rails and columns, the Swiss chalets exude an unspoiled rustic air while hosting the modern days’ comfortable interiors. Below are some Swiss style house plans, ranging from classic to modern, all keeping the traditional main lines of the wooden cabins.

The first plan shows a classic two story wood cabin spreading on 120 square meters. Featuring a simple exterior, the chalet appeals thanks to a façade defined by finely worked wooden rails of the balcony and the porch, with small spots of colors behind them marked by the window and door frames. The ground floor is organized in a simple and practical manner, divided into a living which also integrates the kitchen and the dining and a bedroom in a back corner. A bathroom and various storage spaces complete this level. Upstairs, rest two bedrooms, with the master enjoying the privilege of the large balcony, two other small rooms designed as storage spaces lie on the first floor. After all, living up in the mountains calls for consistent supplies. The second plan follows the same classic style of the Swiss chalets, but gets extra modern elements, such as large tall windows dominating the façade, along a frontal chimney clad in wood. The house sits on 150 square meters and spreads on two levels, of which one is a walk-out basement. Two bedrooms and a lounge lie here, with sliding doors connecting it to the outside. The main level packs a living spilling into the dining and the kitchen, with access on the wrap-around veranda. A second bedroom completes the space on the main level. The third plan describes a modern house which, seen from the distance, appears to be floating in the air. It’s only an optical illusion which is explained by the ground floor being completely clad in glass walls. Its owner wished for an abode allowing him sweeping views of nature and a complete immersion in its environment, especially since the house is isolated in the wilderness. The ground floor is thus dedicated to daytime activities, while the first floor hosts the sleeping area. An elevated outdoor wooden deck plays its role in bringing nature closer.