Square Watermelons – How and Why? 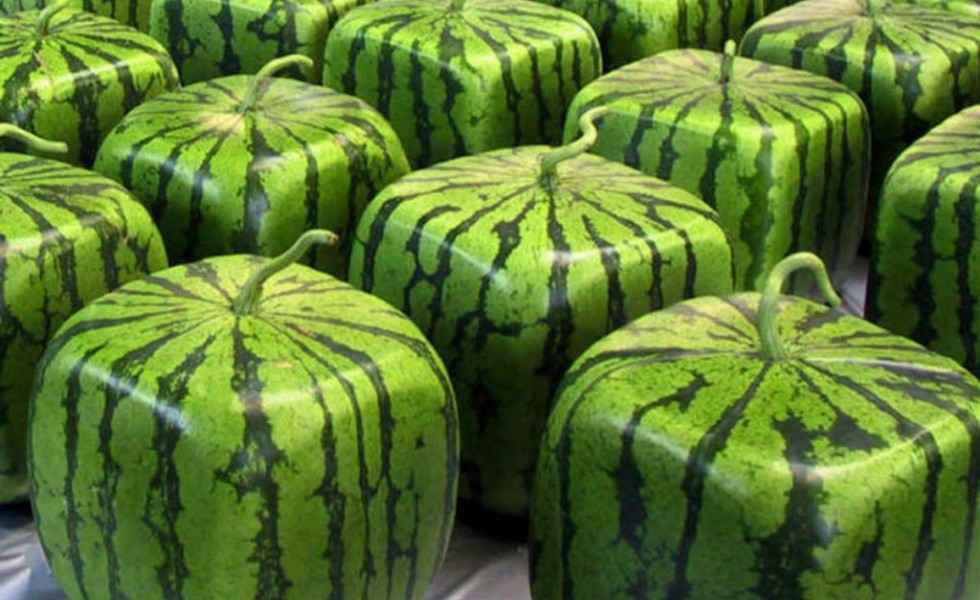 Japanese meticulousness has in time sparked practical ideas, hard to imagine for some, let alone implement them. The Japanese find solutions to most of the problems they encounter and a good example in this regard is our article on the Japanese bathrooms, multi-functional spaces that people in the West could use as well. This time, also from Japan comes the square watermelon. The fruit, with its extravagant appearance, has an interesting story behind, related to the same need for practical solutions.

Why would someone grow square watermelons, other than for the weirdness of the form? This is not just a marketing technique, but the answer given to some problems Japanese ran into repeatedly. So, square watermelons are easy to stack and, consequently, easy to ship. Imagine a truck carrying such watermelons neatly arranged, like books in a bookcase. No space is thus wasted. Secondly, Japanese cities are becoming more and more crowded and, for this reason, people became more sensitive about the space concept. In small homes there are small objects, such as refrigerators. The square watermelons came to fit these small refrigerators.

The second question is: how we grow square watermelons? It’s actually pretty easy to grow a square watermelon and just about anyone can do it. While the watermelon is still small on the vine, a square, tempered glass box is placed around it. When the watermelon gets bigger, it assumes the shape of the box! You can do this too and in all desired shapes. There are even websites dedicated to teaching you how. Just remember to use a glass or transparent mold so the sunlight can reach the watermelon on all sides, recommends Whataboutwatermelon.com Now, some say the shaped watermelons cost more than the regular fruits just because it involves extra work and materials. They also say space problems at home can be easily addressed by slicing the watermelon and storing it in containers in the fridge. Not really, say those who prefer it in shapes, the watermelon won’t stay as fresh as the fruit in its original texture.

As the Valentine’s Day celebrations spread across the world, the Japanese put their imagination to work again and came up with the heart shaped watermelons. Their creativity didn’t stop here, as you can see from the pictures below.