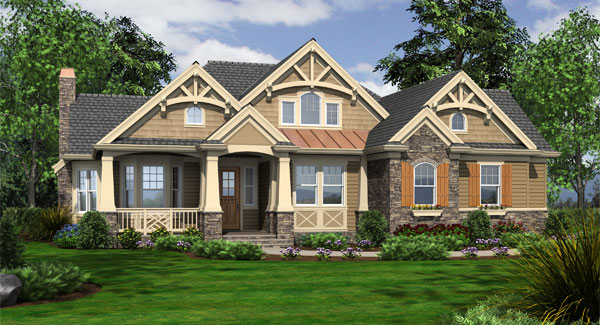 For a young couple or for a couple to retire, a two-bedroom house represents an inspired choice. Thus, in the ranks below, we present three projects of small houses suitable for both a couple, as well as for a small family, consisting of three or even four members, a situation where the little ones are forced to share a bedroom.

The first house is decorated with shutters and a skylight in front. Its useful surface is 120 square meters, and the construction price is below 57,000 euros. Downstairs, in the vestibule, there is a service bath, after entering a large room, in which the kitchen is displaced, with entrance to the technical chamber, dining place and seating space, between the latter there is another exit, sideways. The bedrooms are in the attic with the bathroom between them. The next chosen model is a house with ground floor, with the built area of 129 square meters, of which the usable area is 105 square meters. The house has a living room, a kitchen, a bathroom, a desk, 2 bedrooms and a toilet, making it ideal for a family with one or two children. As for the cost of construction, the red price for this house is 20,000 euros, while the key price is 55,000 euros. Finally, the third and final project comes in simple lines, in an architecture in two waters, but with brick inserts on facades that give it a modern air. The house stretches on a useful area of 60 square meters and, despite the restricted space, comes with several subdivision suggestions, which include one or two bedrooms, in the first case with additional storage spaces. So the house can respond to the needs of a young family with a child. The price at semi-finished of this House varies between 14,000 and 17,000.