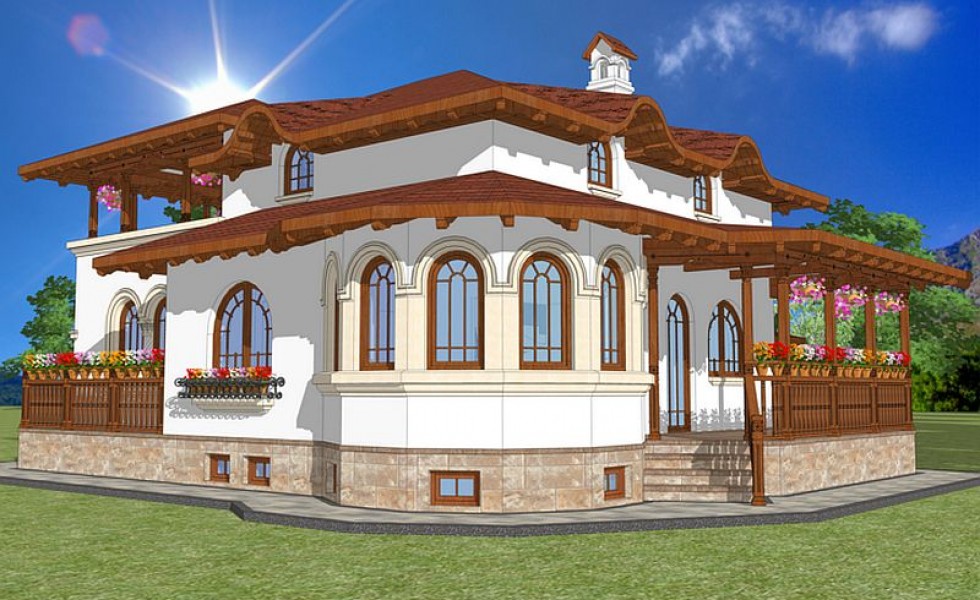 We have written a couple of times about Romanian traditional houses and we will, most probably, deal with this topic again. This time though we spoke to two of the main and also few promoters of this architectural style which exudes so much natural beauty, architects Liliana Chiaburu and Adrian Paun, about these houses featuring wood porches or framed by open aches and columns, who are those ordering them, what building them consists in and, more important, why choose such a home in times when we’re under the siege of modernism.

Liliana Chiaburu drew the first plan of such a home about 15 years ago, after almost as many years since she had graduated from the Faculty of Architecture. Currently, she signs about 4-5 such plans every year, while also actively participating in the construction stage by assisting the handymen. She says the story of such an authentic home starts first of all with a thorough discussion with the client, followed by a detailed examination of the place where the home to be will stand. “I only do customized projects, personalized projects, do not have anything ready-made that I can offer the customer. All my projects are perfectly adapted to the beneficiaries’ requirements and the terrain where they’ll be built. This is why I talk to the customer a lot, I examine the land plot, its environment and surroundings, assess the exposure to natural light because all these help me trace a final architectural solution”, she told us.

The client then picks his own construction team, for reasons which relate to economic efficiency. But the architects spends a lot of time on the building site, giving the workers advice, offering them drawings and correcting possible details as work unfolds so that the final structure matches the customer’s initial desire. In general, she says, her customers are “young people who have this strong sense of self identity” and who understand thus the importance and role of a personalized home. As far as traditional house are concerned, she says they help a person find itself again, while resting and gladdening alike. More precisely, such a traditional home rids one of the burden to go with the flow and keep the rhythm with contemporaneity, stepping out of this pre-established pattern. Once inside such a traditional house, one is happy with he’s got and ceases to keep searching for more. Hence the state of personal satisfaction, tranquility and freedom these homes discharge.

Architect Adrian Paun uses the same words when speaking of his projects. “My customers are both young and old, people who have worked abroad or chose to stay in their home country. But they are all connected by the desire to search and find beauty, that heartfelt irrational feeling”, he explained. In most of the cases, customers know exactly what they look for when they approach him: either a traditional house, or a neo-Romanian style house and, sometimes, a neo-classical building, each of them with a story behind. The architects says he then brings his contribution by inoculating design elements with local flavor which bring extra aesthetic value.

Paun’s story started more than three years ago when an architecture studio he worked for laid him off due to lack of orders. As he found himself jobless, Adrian Paun decided to go on his own professionally even he remembers he didn’t have any specific strategy. “It was as if I would throw myself off a bridge with no wings attached”, he said. But the challenge was quick to come when he was hired to design and build three parish house in the countryside. “I found it awkward to build such homes, where priests who are depositaries of traditions were to live, out of concrete and glass. So I started researching and ended up drawing several plans. As I worked, I realized, deep down, I was starting to like these traditional lines very much”, he recollects.

He says he was also encouraged by people’s 99 % positive reaction and feedback to this kind of projects. As a consequence, as he started promoting his creations, number of orders started going up, too. He is so busy now, he points out, working on up to 20 projects per year. But only a small fraction of the customers end up keeping the traditional features of the house in their entirety. “The architects has a limited responsibility, I learned that across the way. Then all sorts of <experts> come up, relatives, friends, neighbors who only spoil the project. At the same time, a low price offered by a builder also impact on quality in the end and very few customers understand that and learn from others’ mistakes. We are a poor country and we want to get much out of little which, unfortunately, is not really possible”, Paun further explained. But he admits living a great professional satisfaction when a traditional project is taken to the very end according to his specifications. One thing is certain though, Romanians are starting to discover the unspoiled beauty of these beautifully crafted houses. For a turnkey price which ranges between 400 and 500 Euros per square meter, such homes highlight your refined tastes and the joy of living in a warm, welcoming and personalized space which connects you both to the future and the past.  You can find here or here more information about Romanian traditional houses, including plans we selected from the two architects’ websites: caseromanestilacomanda.blogspot.ro si case-frumoase.ro