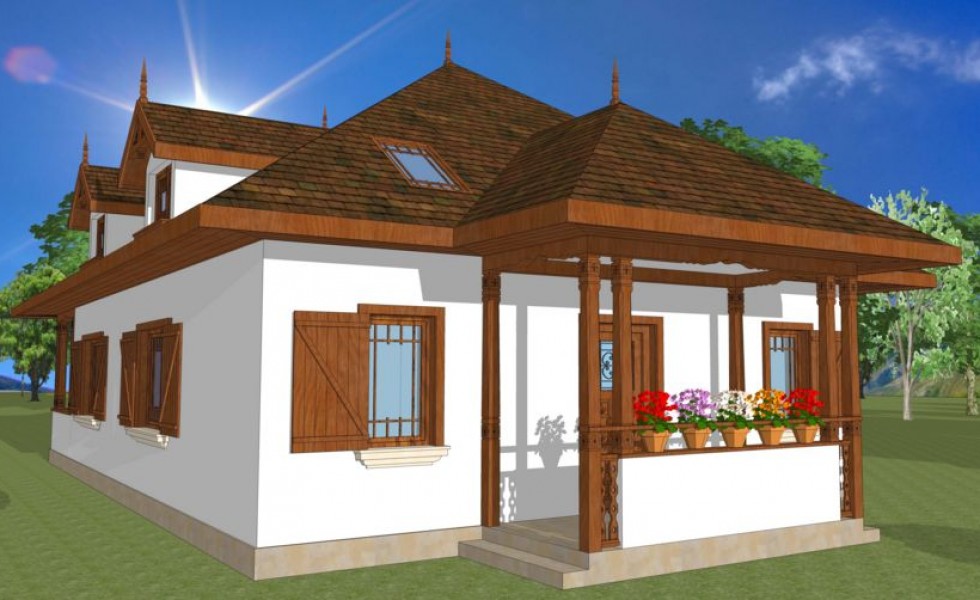 Romanian traditional houses, regardless of the architectural style, have always radiated a special air thanks to the perfect combination of elements in which the woodwork generally plays a central visual role, but in a beautiful harmony with stone. These are homes with arches, beautiful porches framed by stone and wood columns, rails and eaves, all against the white plastered walls. We will hereby see some houses representing different Romanian architectural styles, genuine works of art which more and more people are these days rediscovering.

The first plan is a small to medium size house, on two levels and spreading on 145 square meters. It is a home which is built in the generic traditional style, featuring a strong rustic feel. The house displays the same exterior decorative elements such as wooden columns, shutters and window and skylights frames. As concerns the layout, the main entry is flanked by a kitchen and a dining on the left and a spacious living on the right. A bedroom, a bathroom and storage and technical spaces complete this space. On the first floor, three bedrooms share a bedrooms and a generous storage space. The second plan shows a neo-Romanian style house which is a typically plain house of an exquisite beauty, spreading on a living area of 128 square meters. The façade is dominated by the beautifully wood carved porch and a door which takes some of the decorative motifs of the pillars. The living offers a generous space integrating the kitchen and staircase leading upstairs. The kitchen has an adjoining storage space while the terrace behind the house is seen as a prolongation of the space inside and a transit area towards the back yard. The first floor features a master bedroom, a smaller bedroom for kids and a bathroom. Third comes a peasant home, but one displaying elements of Brancovenesc style, such as stone arches enclosing a beautiful porch. The single level house sits on a total living area of 65 square meters which are divided into a living room and two bedrooms. Finally, here are some Brancovenesc style houses, genuine architectural jewels, which decisively influenced later architectural trends. The Brancovenesc style, which became popular in the eighteenth century, is an eclectic style, namely consisting of elements belonging to many types of architecture: Baroque, Renaissance, Byzantine, Oriental etc. The buildings built in this style show exceptional details, but without being overloaded. The ornaments are offset by the simplicity of the buildings. Many houses in the Brancovenesc style have an open porch with arches and columns or railings with vegetal motifs, extremely elegant. Romanian architectural styles – Brancovenesc style with a touch of modernism