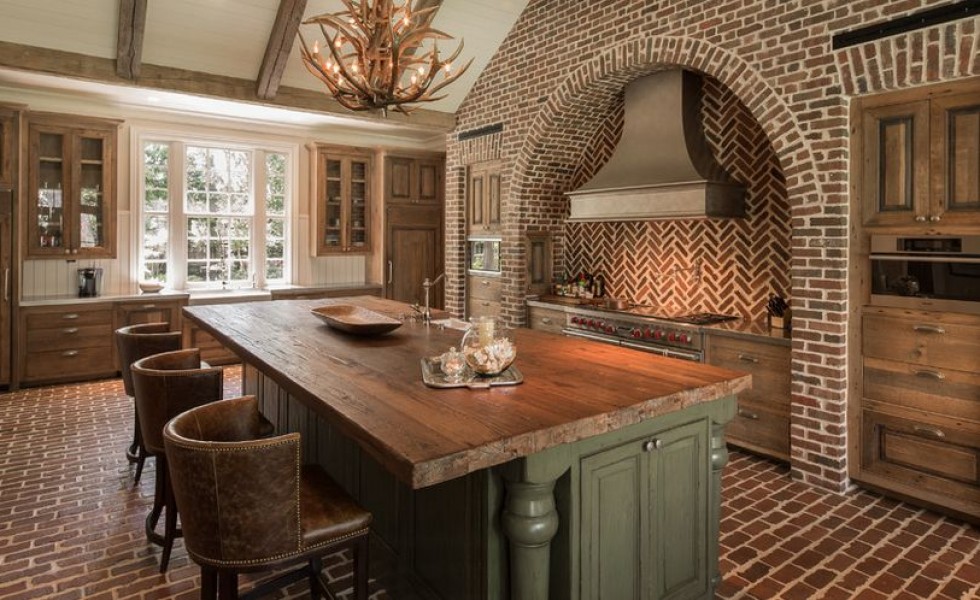 Whether inside or outside, bricks always shape a distinct personality. Reddish hues warm up the place, but equally give the room a rustic, traditional and sober air, as we will see in the images below.

First of all, let’s put some bricks in the kitchen, carving cupboards and the electronic appliances. Bricks and wood made drawers and doors make up a chromatic unity with a classy look. Brick is a unique construction material which gives enormous possibilities to create strong architectural effects. It is a pity to throw it away! Take the example of this kitchen in a Texan home where bricks perfectly second wood in the furniture and beams. The room has an archaic look, but the friendly nature of it is not at all blurred by the mas of bricks.

Simple, yet intense. The contrast between the brick wall and the other white walls is of great effect, the whole room appearing to be in a color balance maintained by the combination of wood and bricks, on the one hand, and the immaculate white. You can also impregnate a note of originality in a room, such as a living or a bedroom, by covering one of the walls in bricks, as seen in the images below. The bricks will break the chromatic monotony and will become the visual focal point, drawing all looks. Take this experiment further out and pave the patio with reclaimed bricks for a complete space of respite. You can set up the design in many manners, depending on your imagination and taste. You can also build an arch inside your home to serve as a border between two rooms. The home gets an extra elegance thanks to this unique design element and which will draw eyes like a magnet. Maybe there is no better match for reclaimed brick structures than a rustic cabin where bricks perfectly supplements the dominant wood for a warm interior design. Since we mentioned kitchens, living rooms and bedrooms, then we should also make a quick stop in a bathroom redesigned with reclaimed bricks. Modern sinks and cabinets against a brick wall is a highly unusual image, but utterly interesting and original.