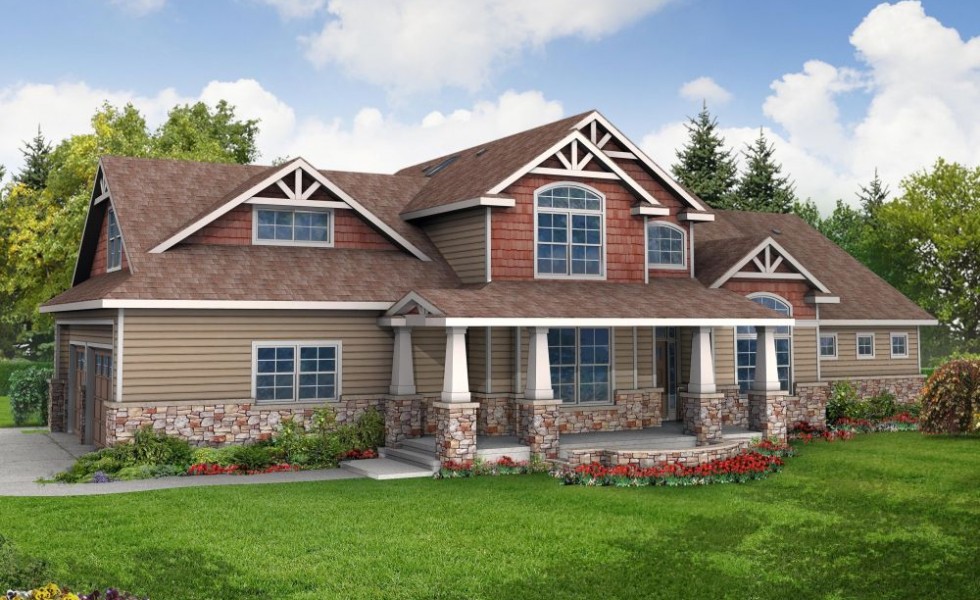 Late 19th century, a new trend was arising in architecture in America. Seen as a backlash against the elaborate Victorian style of the turn of the 20th century, the Craftsman house displays the honesty and simplicity of a truly American house, promoting handiwork and natural materials. Craftsman home plans are cozy, often with shingle siding and stone details. Open porches with overhanging beams and rafters are common to Craftsman homes, as are projecting eaves and a low-pitched gable roof. A combination of natural materials are used, such as wood and stone, and often a combination of more than one type. Here are three one story craftsman house plans:

The first is an apparently small house, but very spacious, sitting on 2,333 square feet of which 426 is the bonus space. The angled garage of this craftsman ranch keeps the focus on the striking entry. Step into the foyer to immediately get a great view of the vaulted great room with its fireplace and built-in media center. The great room then flows out, through a set of double doors, to the vaulted outdoor living room with a fireplace of its own. The columned entry is also of great visual effect. The second example is a remarkably beautiful home, with a façade partially covered in stone which gives it a distinct personality. The contrast of the stone and roof grey and the white edges of the roof is of great visual effect. A French door leads to the vaulted screened porch while the deck is accessible from both the screened porch and master bedroom. A decorative square column and tray ceiling adorn the elegant dining room. The house boasts a lot of bonus room and a large basement. The last of the one story craftsman house plans is a smaller house. This 3-car garage offers space for a two-bedroom apartment on its upper level. The exterior is reminiscent of the architecture of the arts and crafts movement by featuring sturdy columns on stone bases, lap siding and cedar shingles. Double doors in the living area open to a charming railed deck on the first floor for an extra space of tranquility.