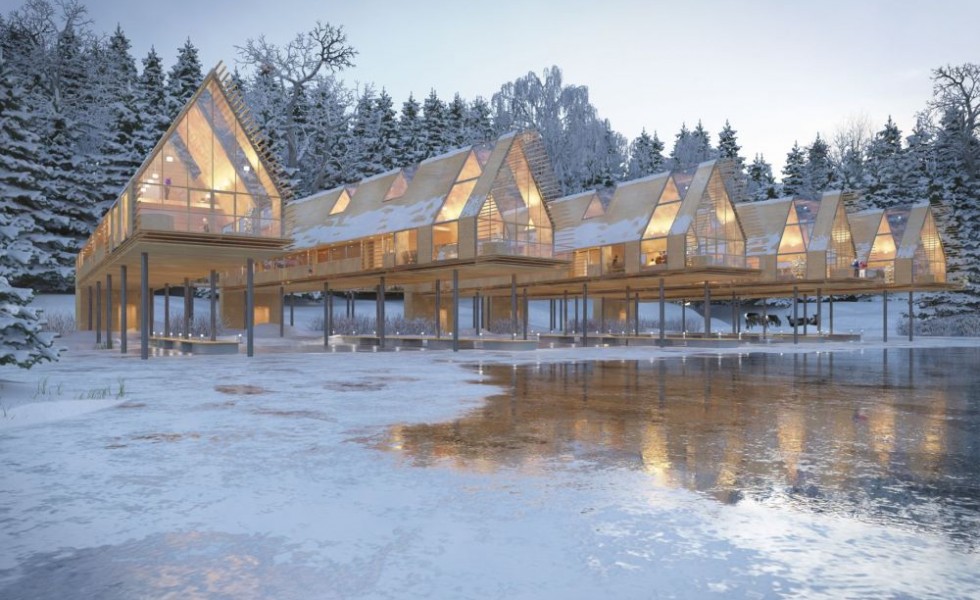 Scandinavia means, first of all, progress through innovation and this reality is mirrored in any aspect, including the housing sector. As we will see below, traditional wooden houses are starting to make way for futurist, modern design homes, but which still keep the classic note by use of wood, the preponderant construction material in Scandinavia, taking ingenious forms as constitutive part of a bold architecture. Below we can see several Norwegian style house plans, from classic to modern:

The first example is a log house, typical for Norway. The one story house is very spacious with its façade dominated by the suspended roofed balcony built on top of the patio on the first floor. Behind, another covered terrace gives the owners an extra space of tranquility on those chilly Scandinavian evenings. The green roof house fits the fir tree woods surrounding environment perfectly. The next plan is a modern holiday retreat, built by a Norwegian designer on the North Sea coast. The sober looking design is offset by the massive glass-works, typical for Scandinavian houses that capture natural light by any means. The house is divided in three gabled buildings which were designed to allow the families to holiday together while keeping their own personal space, with two separate bedroom cabins and a communal living and dining area. The three cabins are positioned in a secluded spot at the foot of a stony hillside that benefits from a mild micro-climate, allowing the open-plan living room and kitchen to have glazed ends. The central cabin, the most transparent of all, share cooking and living facilities, while the other two cabins house the sleeping and bathing areas. The third project is a house with a seemingly humble exterior, weathered by time. This is just a mere impression because once you see the interior the rustic feeling goes away. The M shaped roof house is built of brunt and brushed fir tree wood which, along the stone insertions on the façade and inside, give it a unitary chromatic appearance. The house boasts wide windows so arranged that they invite 180 degrees views in. the interior catches the eye with its offbeat fragmented architecture, marked by soaring ceilings and skylights ingeniously set up so they allow natural light invade the space inside from various angles.