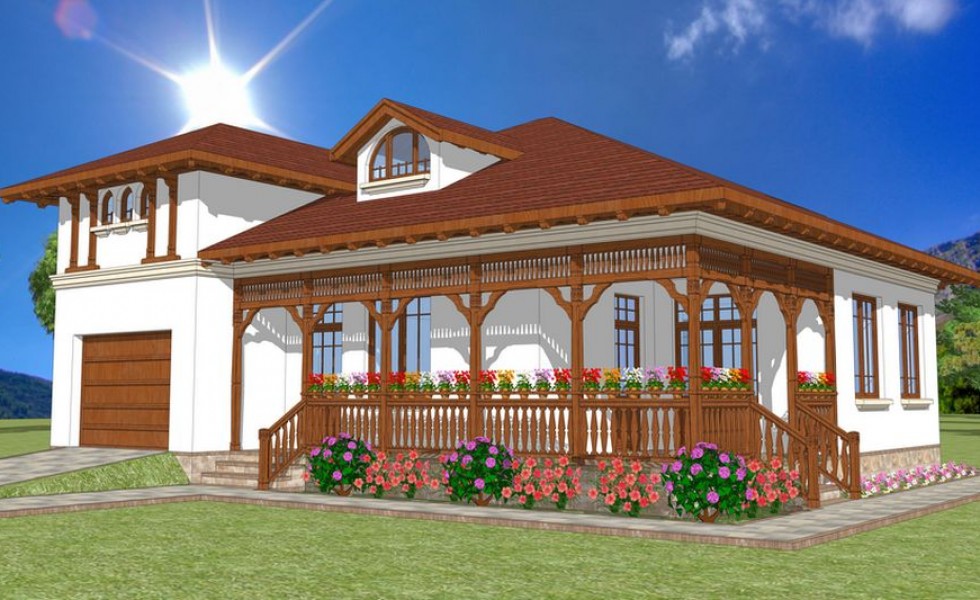 The Neo-Romanian style came into being in the second part of the 19th century which saw a movement started by architect Ion Mincu, which decided to look back at traditional architecture and bring it forward in a modern, functional way, a style which had its heyday all the way till the first decades of the 20th century. Meanwhile, impressive mansions appeared across Wallachia, in Southern Romania, and not only, with carved stone or wood columns, imposing entrances and arched window frames decorated with stucco, painted, glazed or carved patterns of floral or animal motifs. Below are several Neo-Romanian architecture house plans:

The first plan is a typically plain house of an exquisite beauty, spreading on a living area of 128 square meters. The façade is dominated by the beautifully wood carved porch and a door which takes some of the decorative motifs of the pillars. The living offers a generous space integrating the kitchen and staircase leading upstairs. The kitchen has an adjoining storage space while the terrace behind the house is seen as a prolongation of the space inside and a transit area towards the back yard. The first floor features a master bedroom, a smaller bedroom for kids and a bathroom. Neo Romanian architecture – the beauty lies in the carved wood The second project represents a house elegantly combining tradition with modernism, with the latter being discretely represented by the integrated garage lying under the two wooden columns, an interesting association from a visual point of view. The house sits on 156 square meters and is structured into a living room, three bedrooms – all of them on the third floor – a kitchen and two bathrooms. The main entry is protected by a very beautiful veranda, framed by wood columns and a carved fence, continued on the other side of the house by a spacious terrace. The third example is a Romanian traditional style house with a dominant porch on the first floor, highlighted by wood columns and beautiful masonry on the supporting wall set in river stones. The arches give the house a classic, vintage appearance, matched by those framing the windows all around the house.