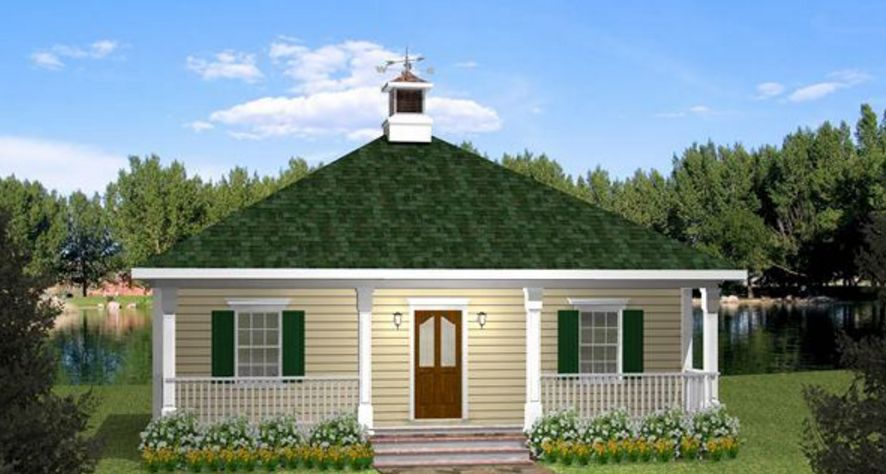 You want a home as small as possible to save on the building and the heating later on, with a simple, but smart design. It is indeed easier to build small, rather than large and pretty. Here are three house plans under 1,000 square feet, for low-cost homes built in wood, with a simple, charming architecture.

For starters, here’s a lovely cottage of only 792 sq. ft., with 1 bedroom. Like the following two plans, it has a symmetrical facade, with covered porch all along. It has a gable roof with a large dormer in the middle, above the entrance. There’s a foyer at the entrance, then straight ahead are the bathroom and kitchen. On one side and the other of these functional spaces are the living room with fireplace and the master bedroom. The living room has an exit in the back, where there’s another covered porch. The second plan has an area of 864 sq. ft. and is a 2-bedroom home. There’s a different design, with a hip roof and smaller windows with shutters. The interior division is also quite different. The entrance leads directly into the main room, with the kitchen behind. There’s a laundry room behind the kitchen, accessible from the back of the house. The bedrooms and the bathroom are next to the main room and kitchen, but there’s a small hallway conveniently separating them from the living areas. The last house we’ve selected is only 600 sq. ft. large, but comprises a bedroom and a bonus room. Plus there are covered porches in the front and back, as well as a rear screened porch out of the bedroom.