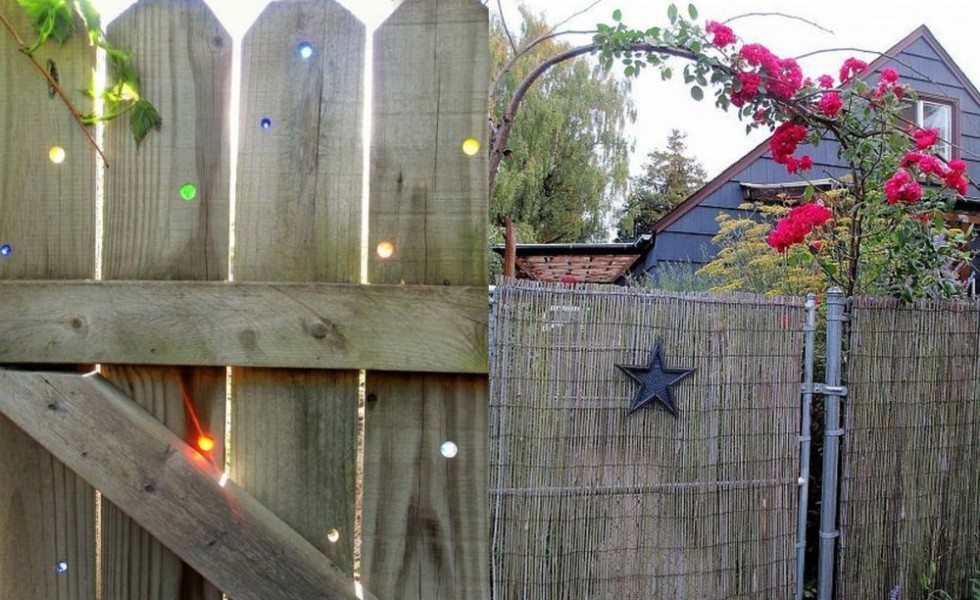 The garden fence is the barrier separating your little universe from the outside world. If your home is open at the front, the fence protects it in the back from intruders of any sort, such as animals treading on your flower and veggie beds and neighbors’ curious looks. You can also use fences, built of repurposed materials, to create borders on your property and delimitate different spaces, for a more appealing aspect. Below you can see some examples of DIY garden fence ideas based on materials we normally throw away so easily.

Of course, we start with a classic fence…or better said, an apparently classic fence. Made of wood boards, a construction material at hand for many of us, the fence shown below has a peculiarity: the owner drilled holes in the boards and then covered them with marbles in different colors for a final eye pleasing visual effect. Use your imagination! Use old wood pallets, paint the boards and arrange them in various shapes or sculpture the top end as shown in the images below. You can also raise a fence which first of all serves as a support for a vertical garden. It can also take on the role of a screen in the garden, especially if you add one more next to it. Protect your flower beds and vegetables from animals and birds by building a chicken wire fence. It is easy to build and allows you to still admire the flowers behind it. We have previously mentioned that among the so many ideas to reuse plastic bottles is to raise a fence made of them. You still run the risk of drawing even more curious looks from neighbors with such an ingenious fence. A fence can also be built out of reed, willow twigs or bamboo. It gives your garden an extra rustic air apart from always looking authentic. If you have kids in the house, then this DIY garden fence idea is the best solution to kill two birds with one stone – a fence which girdles your property incorporating a slat for kids to draw on and develop their creativity and imagination. For those who don’t shrink from making a small investment in their garden, the idea below is an original one. A gabion wall always looks sober, but strong and durable, giving your garden a distinct personality.