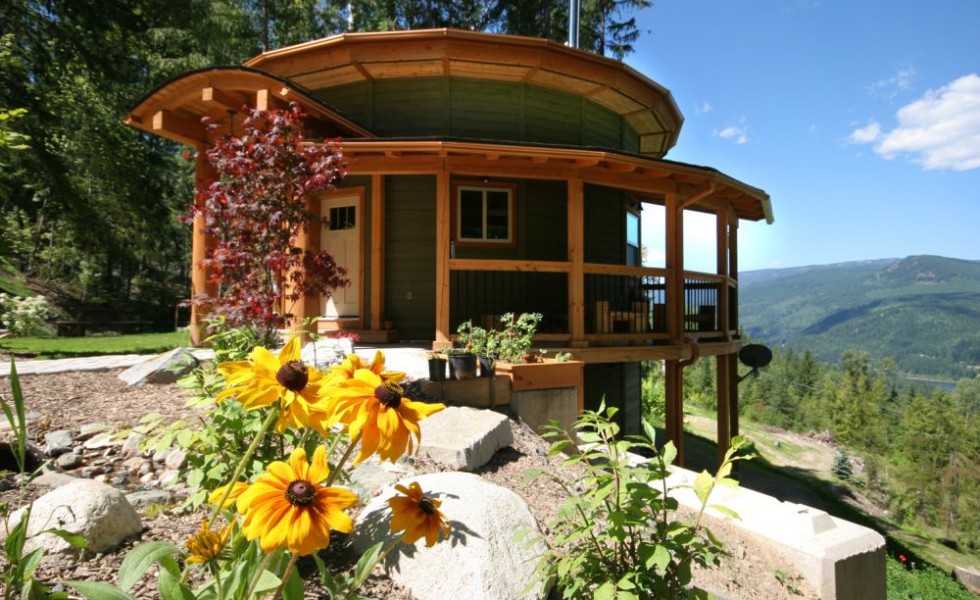 The circular house were among the first to be built my humans thousands of years ago who sought to imitate by this design the shapes they saw in nature – tree trunks, stones and the moon in the sky, among others. In time, practice has shown circular houses can be more comfortable, more energy efficient and safer, especially when the modern materials and technology come into play. Just imagine that strong wind gusts move naturally around the circular shapes rather than ripping off corners and the roof. Below are several circular house plans to draw your inspiration from:

The first example is a single story round house, built on a lake side and painted to match the water stretch next to it. Designers came up with two separate plans for this house, one featuring two bedrooms and the other three. Both houses sit on a 139 square meters surface and have an almost 15 meters diameter. As in the case of classic design homes, the living room, the kitchen and the dinning make up a single open space which takes almost half of the home. The house is surrounded by a circular terrace, a continuous space of tranquility that one can walk into from the living and the master bedroom. Circular house plans – the lake side round house The second plan is a two story oval shaped house spreading on 178 square meters. Similar to the other house, the design comes in two distinct plans, with three and four bedrooms, depending on the size of the family, each with three bathrooms. The interior seems to be an open space, dominated by the living and the adjoined kitchen on the ground floor and the bedrooms on the first floor, each with wide windows inviting panoramic views in. The third plan is a round house sitting on 141 square meters, built in a mountainous area. The house has two bedrooms and an attic and is surrounded, like a girdle, by a circular terrace which allows breathtaking views of the mountains around and visually layers the façade. The house is entirely built from wood to perfectly integrate in the surrounding natural environment and designers say it is a model of both spacious living on a small ecological footprint. Circular house plans – the house in the mountains