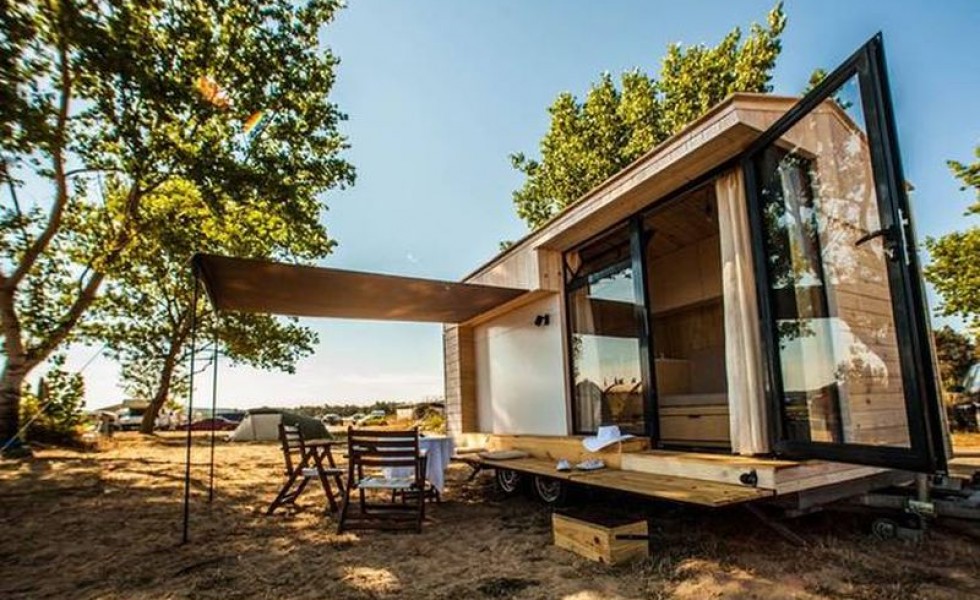 Sometimes, when you cannot go straight, you just take a detour which will in the end take you to the same destination. This is what a Bulgarian family exactly did when, not affording to build a holiday retreat in the mountains or on the seaside, they didn’t give up on the idea of some personalized vacations and built a tiny house on wheels which is now taking the four of them anywhere they like. The structure, says Hristina Hristova, the designer behind this ingenious project, is a more comfortable alternative to a tent and tourist traps, and as a cheaper option than buying a recreational vehicle or a piece of country land.

„Our limited budget as a young family kept the idea of buying a plot and building on it distant and impossible. And by doing so we were just going to be part of the concrete army invading the seaside. So we opted for making our retreat on wheels. Under the canopy we spend long afternoons drinking chilled wine”, she told Dornob.com

The designer called this tiny vacation house Koleliba – a made up word meaning a hut on wheels – and said this was her family’s response to the invading consumerism that encourages people to always want bigger homes and unnecessarily luxurious. Hristina used the chassis of an old trailer and built the walls out of pine and birch plywood and insulated with rockwool. Koleliba spreads on 96 square foot and features a large glazed door and window which bring the facade some dynamism. Inside, a fold-out couch-bed that tucks away to make more space when not in use. The kitchen features a sink, refrigerator, oven and a generous amount of counter space. But the real holiday fuss takes place outside where the removable bench and a large awning are the main attraction, a tiny space of vitality where the family spends chilly mornings and evenings. Even though harder to maneuver than a tent, such mobile structures can be used to bring in extra rental income when owners finish their vacation. With more and more people now after alternative ways of living and seeking to get closer to nature, this simple, original and functional home will surely not lack customers. Bulgarian vacation getaway on wheels – the real fun is outside