Bitter Melon Culture. How to Grow The “Green Insulin” 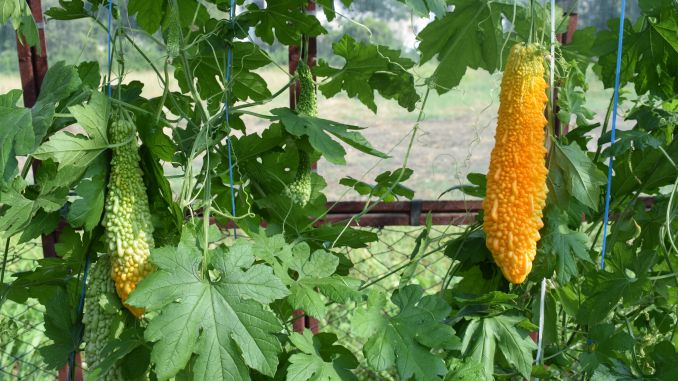 Bitter melon (Momordica charantia) is a tropical plant from the family Cucurbitaceae, that originated in South-East Asia and Africa and is grown for its fruit – extremely bitter, but rich in antioxidants and nutrients. It’s known as the “green insulin”, as it contains peptides that have similar molecules to insulin, alkaloids and glycosides  that act together to lower blood sugar level. The popularity it gained made it an object of study for the Vegetable Culture Research Center in Buzau, where up to five cultivars adapted to Romanian climate were obtained. Here’s what the researchers say about the bitter melon culture.

“It’s a plant we’ve been studying since 1992. In time, we’ve obtained several cultivars, among which one was registered as Rodeo”, said researcher Costel Vinatoru from the Buzau center, according to agrointel.ro.

Rodeo, the bitter melon cultivar brevetted in 2014, has certain qualities that make it highly appreciated by Romanian growers.

The fruit is first greenish-white, then white and, as it ripens, it turns yellow-orange. It has a soft pulp and seeds that look like candy, covered in a red, very sweet jelly. When fully ripe, the fruit cracks and the seeds get spread around. They instantly attract insects, especially ants, that transport them and so new plants appear the next year.

Costel Vinatoru is confident about the future of bitter melon culture in Romania, even if it’s still seen as something exotic.

This fruit is effective in decreasing blood sugar level and helping diabetics, especially those who aren’t yet insulin dependent. It also decreases cholesterol, helps the liver and drains the gall, among other benefits.

The only downside is its extreme bitterness, very hard to accept by Romanians. “We eat a lot of very sweet or salty things, but very little bitter stuff”, says Vinatoru.

On the other hand the perfume that the flowers of the plant give off is like from a bottle of one of the most expensive essences.

Momordica charantia can be very productive, even on small areas. That’s why it’s a good culture for farmers with gardens or small greenhouses. A single plant can produce 20 kilos of fruit.

If planted in a greenhouse, it produces by the end of June, while in the garden, it will be a month later.

It takes well to extreme environment conditions and it has its own mechanisms to keep pests away, so it can easily make a bio culture.