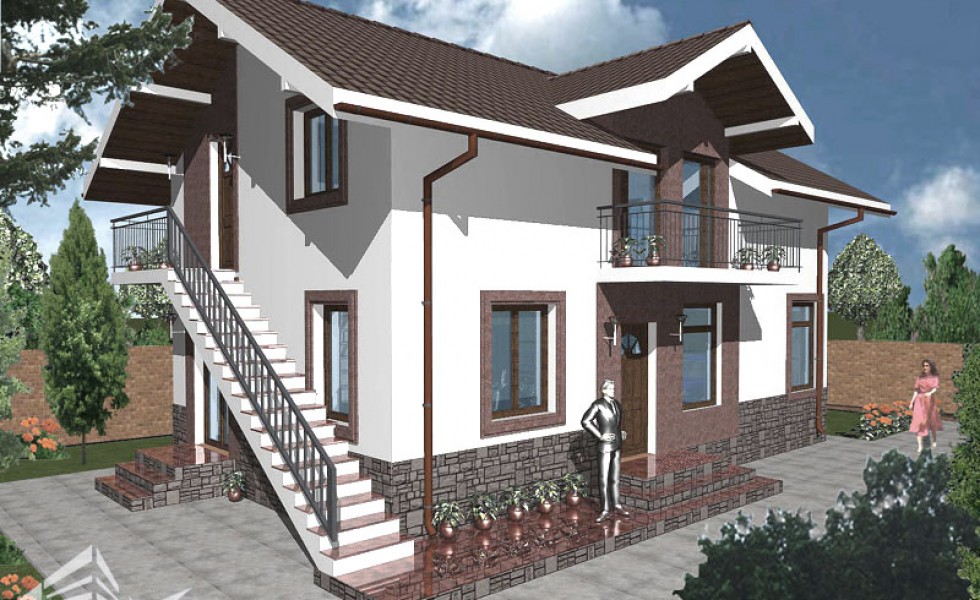 This is not an often seen view, but such houses with exterior staircases combine aesthetic and practical aspects. In many cases, these stairs are added after an attic is set up as a living space and allow those who live on the second floor to organize separately from the others on the main floor. At the same time, such an architecture is recommended to those who want to turn their house into a hostel, allowing customers to enjoy a separate entry. Here are some plans and examples of attic houses with exterior stairs.

The first example shows a house spreading on a living area of 120 square meters. It is a house that features a classic architecture that stands out thanks to decorative elements that match the overall chromatic display. Unlike most of the plans, this house packs a kitchen and a dining which lie completely separately from the living, in opposite corners. The ground floor also features two rooms which can be set up as bedrooms, with the smallest ne making a fine study. The same layout is found upstairs, with the living area divided in two separate rooms, alongside two bedrooms. The second plan shows a modern two story house spreading on 104 square meters. The house features an integrated garage and has the exterior staircase as a distinguished design element, continuing a large deck upstairs, along an imposing chimney. On the ground floor, the living spaces come together in one single room, while the layout is completed by a bathroom and a storage space. Three bedrooms lie upstairs, two of them connected to the spacious deck on the first floor and that spills downstairs along the staircase. At the end, here are some other examples of houses featuring exterior stairs, always a viable option to consider when looking to build separate entries for the two levels. The spiral staircase is the most accessible choice for two story houses since it takes less space than classic stairs which are recommended for taller buildings.