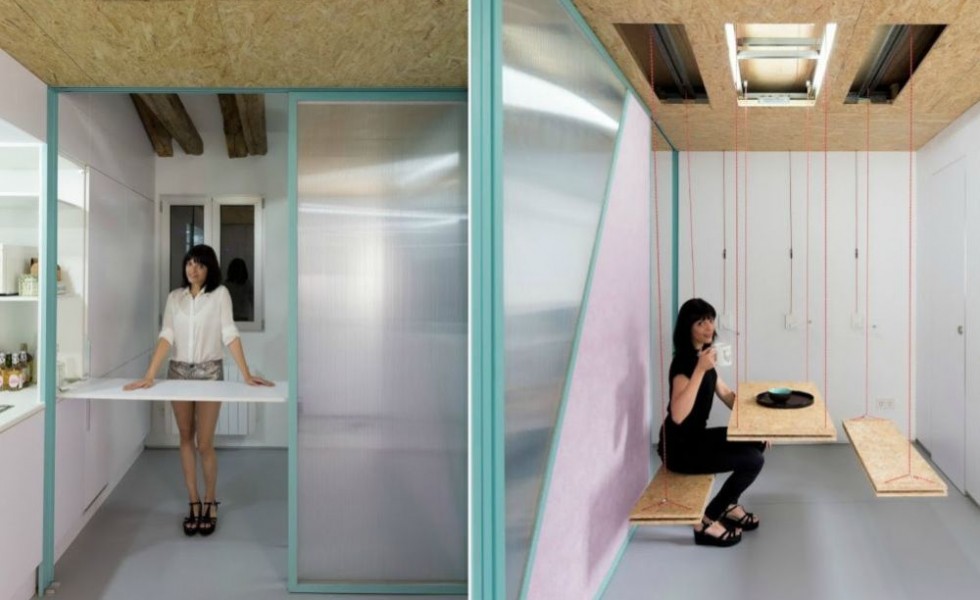 When Dido Fogue moved into a studio in the Spanish capital Madrid, she was faced with the challenge of setting up a living, a bedroom, a kitchen and a bathroom in a single open space. Since all her plans remained on paper, she called in the professionals to come up with optimal storage solutions so she saves as much space as possible. What came out can be easily seen below, intelligent storage spaces and space saving features so that the small room seem as big as the eyes can see.

The loft studio lies on solely 58 square meters. But despite the small area, the designers managed to come up with a couple of space-saving features like hidden compartments, trap doors, and a hanging dining room table that can all be tucked away when not in use, according to magazine House Beautiful. If you take a close look at the studio and see there is no seating area you may be left with the impression the place is deserted.

First of all, the designers mounted partitions that roll on rails and allows the homeowner to determine how she wants to use her living space. Her options include a private bedroom for guests, a separate kitchen and dining room, or an open-door set-up that makes her living quarters feel bigger. In the bathroom, the tub is sunken in the floor so it can be covered if need of more space arises. What you see in the images below is a vanity also hidden under the floor and which is accessible via a trap door. In the kitchen, a cooking table and countertop can pop up anytime from a wall while a dining table and a set of chairs descend from the ceiling. This is something unseen before, we have to admit it! A few steps away, in the living, the owner turned her nose at the idea of a large couch and went for a retractable hammock instead which comes with a bookshelf also hidden in the ceiling. Now, however ingenious these ideas may seem, they have a price: the whole installation costs as much as 75,000 USD, probably the price of the studio itself. But what use of money if there’s no space?